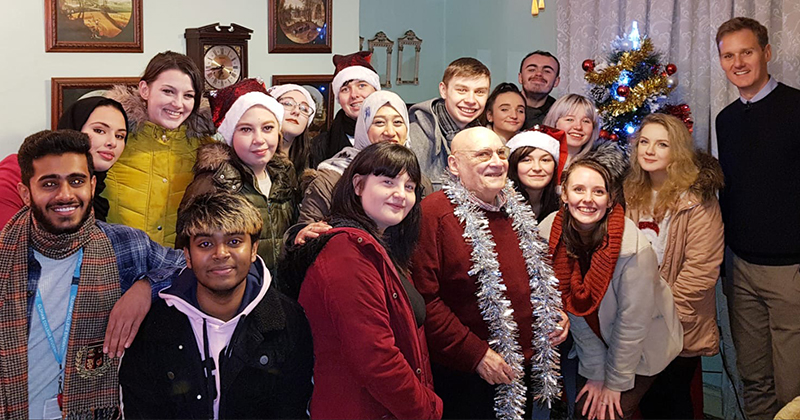 Oldham College learners have teamed up with BBC Breakfast to deliver a Christmas tree and a carol concert to a lonely local pensioner.

After Terrance went on the show to talk about how he had spent every Christmas alone since his mother died 20 years ago, college leaders put their heads together and agreed they had to do something for him.

They got on the phone to BBC Breakfast to organise Terrance’s festive surprise and to find out his favourite carol – Silent Night – so they could set the choir to work rehearsing it while they carried out some emergency Christmas shopping.

A caravan of gifts, singers and a Christmas tree then met up with Breakfast presenter Dan Walker around the corner from Terrance’s house on Wednesday night.

After Walker went to speak with Terrance, he let in learners from the nearby college to erect and decorate a Christmas tree in his front room.

They then helped the emotional Terrance, who volunteers with Age UK, to go outside and hear the choir deliver their rendition of Silent Night.

Blown away by all the messages. Thank you again for the kind words about Terrence. This is Sophie – one of the students from @OldhamCollege. She signed up to be an @age_uk volunteer after meeting him last night 👏🏻👏🏻👏🏻#Lonliness #BBCbreakfast pic.twitter.com/qiFOVCl7FH

“This is what Christmas spirit is truly about,” said Oldham principal Alun Francis.

“We were so proud and privileged to be able to help Terrance. His volunteering for Age UK is a real asset to the community – two students were so touched by their visit that they immediately signed up as volunteers themselves.

“We are delighted to have been able to help warm the hearts of the nation ahead of the festive season. This is a story about what represents the very best of us all and showcases the amazing work that all FE colleges – not just ours – do with our communities.”

❤️ Our next guest on #BBCBreakfast: @JohnBarrowman was so blown away by Terrence’s story he’s got an extra #Christmas gift 🥰⬇️ pic.twitter.com/VhECaotsks

Terrance will not spend this Christmas alone: he is seeing his 90-year-old friend Nancy, whom he met through Age UK.

And as an added bonus, actor and singer John Barrowman has offered Terrance VIP tickets to his Fabulous Christmas Tour in Sheffield.

Oldham’s musical endeavours do not stop there, however: the college is also in the running to be Christmas number one with its single Christmas With You, and all its proceeds will go to Stop the Traffik, a charity which fights human trafficking.

At the time of writing it has been played almost 4,000 times on Spotify and had over 4,500 views on YouTube.