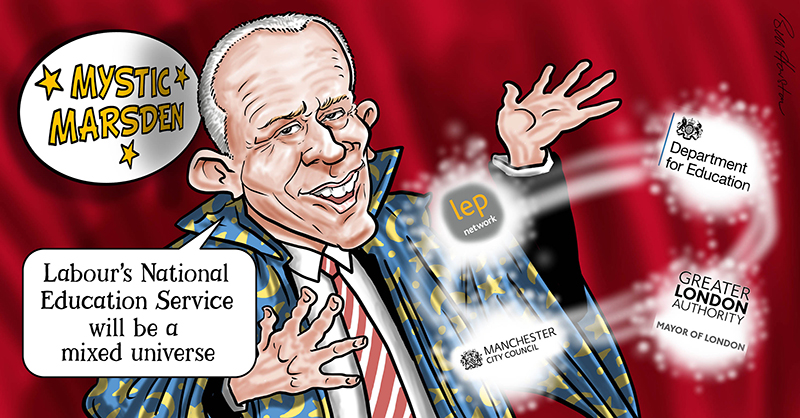 Labour will not prevent independent providers from accessing public funding if the party wins next week’s general election, even though its manifesto pledged to “reverse the privatisation” of FE.

And nor does it want to “dictate the management of colleges or bring them under new forms of control”, the shadow skills minister insisted this week.

FE Week approached Gordon Marsden after reading a Labour pledge that said: “We will reverse the fragmentation and privatisation of further and adult education, incorporating it into a single national system of regulation that functions for education as our NHS does for healthcare provision.”

“We want to ensure there is a common system of regulation”

He conceded that he would not have used “reverse privatisation”, and said that in an attempt to mention “absolutely everything” in a manifesto, “the people writing it try to compress things and there is some degree of ambiguity”.

Marsden said that this pledge was “about ensuring that there is a common system of regulation across the sector”.

This meant ensuring “all institutions, whether they are colleges or private training providers, follow the principles” of Labour’s proposed national education service’s (NES) charter.

“This is not about changing the management of colleges or bringing them under new control, and it is not about private training providers not being able to receive public money,” he told FE Week.

“Sometimes there is a broader context in which you have to see these things. There is a big divide between us and the Tories. They believe everything can be done by the market.

“We believe that the market can operate within a set of principles that are common and to that extent give parity of esteem between higher education, skills and further education.

“At the heart of that will be the principle of the provision of universal learning, available as a right.”

Marsden said a Labour government would act as an “enabler, not a top-down micromanager from Whitehall” and described its approach as “pluralistic”.

“We have made it very clear that we are moving away from the market-driven, fragmented and siloed view of FE – the context of the words used in the manifesto under the Conservatives, which has led to the problems, disparities and in some cases scandals that have afflicted the senior management of a minority of colleges,” he said.

“We are committed to promoting a more collaborative and strategic approach, as well as significant extra funding, between colleges and a range of providers.

“Whether people agree with it or not, the fundamental thing we are saying is that the marketised competitive approach this government has used has not only failed in social justice, it has failed economically. You can see that in the apprenticeships area. We are charting a different route.”

Marsden refuted the assumption that Labour was looking to take the profit motive out of FE, but did say every provider needed to be held to account.

“This is not about changing the management of colleges”

“No one is saying an organisation shouldn’t make a profit, but that profit and the way in which it makes it and the salaries it pays in terms of ratio between the people such as lecturers and senior management, needs to be accountable and realistic.”

FE Week previously reported that colleges’ status as independent corporations could be at risk under Labour’s plan for free lifelong learning in 2017, after the party’s leader Jeremy Corbyn hinted that he wanted to bring them back under local authority control.

Asked to clarify the party’s position, Marsden said: “As we’ve said in the NES charter, colleges should operate with the maximum of democratic accountability at local and regional level.

“Some people tend to talk about FE as simply a product of government doling out money here, there and everywhere to providers and colleges. The reality of it is we are in a changing universe where you’ve got mayors and combined authorities and, for that matter, local enterprise partnerships.

“So the 2020s are not just going to be about what a minister of whatever party says in Whitehall about FE or skills or whatever. It will be a mixed universe of these various bodies.”