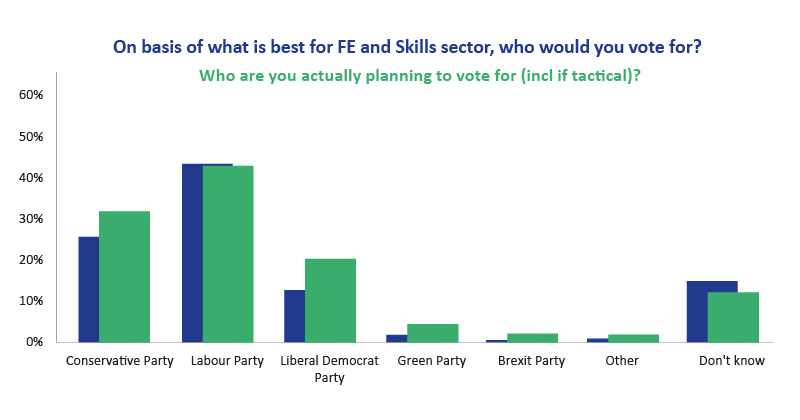 More FE professionals will be backing Labour than the Conservatives at next week’s general election, exclusive FE Week polling can reveal.

When asked who they would be voting for, 37 per cent of the 542 respondents replied saying Labour; while 27 per cent said the Conservative Party.

Coming in third were the Liberal Democrats, on 17 per cent; ahead of ‘don’t know’ with ten per cent and the Green Party, three per cent.

The Brexit Party has made little impact with sector workers, narrowly avoiding last place with one per cent, little more than the option for ‘other’.

A majority (58 per cent) of respondents also did not believe a Conservative government would be good for the FE and skills sector.

The Conservative party were the least trusted of the three main parties to carry out their FE and Skills manifesto commitments for a £3 billion National Skills Fund and near £2 billion for capital estate upgrades.

They earned 53 per cent on the least trusted question, compared to Labour with a 26 per cent share.

The Liberal Democrats should be happy with a nine per cent share, after coming behind ‘don’t know’, which scored ten per cent.

Labour scored the most for ‘Of the 3 largest parties, which do you most trust to carry out their FE and Skills manifesto commitments?’ with 41 per cent.

Were survey respondents to vote on what they believed was best for the FE and skills sector, 43 per cent said they would put their cross in the box next to Labour candidates.

A quarter said they would back the Conservatives, 14 per cent did not know, 12 per cent opted for the Liberal Democrats, and one per cent said the Green party.

The one landslide from the questions was for remaining in the EU; which was voted in favour of by 63 per cent of people who answered what they would like to happen with Brexit.

Boris Johnson may be slightly buoyed by the fact the option for ‘leave the EU with the current Conservative deal’ came in second… with 17 per cent.

Respondents were drawn from across colleges and training providers, which had some very different views on the election.

Thirty five per cent of respondents from FE colleges said they would vote for Labour, while 39 per cent of PTP voters told FE Week they will back the Conservatives.

For further analysis of our survey, read our general election 2019 supplement, which also features the full story on the various parties’ election pledges for FE and skills sector.