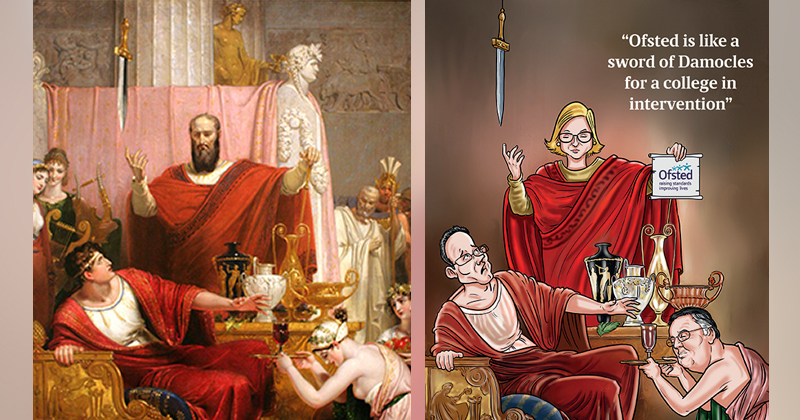 Ofsted was criticised by an experienced turnaround principal for inspecting colleges just before mergers, at the Association for Colleges’ annual conference this week.

Andrew Cropley, who has been involved with three FE commissioner interventions, said he had an “unfair experience of being inspected” and the education watchdog must find a better way to work with colleges during a panel at a workshop called “Balancing oversight, support and intervention”.

He compared Ofsted to “a sword of Damocles [an allusion to the ever-present peril faced by those in positions of power] in a college in intervention” but reserved praise for the FE commissioner and was “confident” that the regime would prevent lack of action by leadership in the future.

Cropley was previously an interim principal at both Stratford-uponAvon College and Cadbury Sixth Form College and is now principal and chief executive officer at Vision West Nottinghamshire College.

He was asked what improvements could be made to the college intervention regime, of which he said he had two criticisms.

He questioned why Ofsted inspections of colleges in formal FE commissioner intervention took place shortly before a merger and highlighted the impact of scrutiny on staff’s mental health.

Cropley said: “At Stratford-upon-Avon College our report was published 56 days before it dissolved. Three staff went off with some mental health issues on the day of the inspection. What was the point, apart from putting us through the mill?”

The college was inspected in September 2017 and downgraded from a grade two to a grade three.

It had been told by the FE commissioner that it urgently needed to merge in order to survive after being bailed out by the Education and Skills Funding Agency. It merged with Solihull College & University Centre in February 2018.

Ofsted’s approach appears to be at odds with its own policy, introduced in June 2016, that says “deferral or cancellation should, normally, only be granted if… the provision is due to merge, close or move and it is decided that no useful purpose will be served in inspecting it”.

An example of this policy in action was revealed in December 2017, when the National Audit Office reported that Ofsted had decided to defer the inspection of Learndirect Ltd, the largest training provider in the country, as its “apprenticeships provision was about to move and there was no evidence that learners’ welfare was at risk”.

Birmingham-based Cadbury Sixth Form College received a visit from Ofsted within six weeks of Cropley’s arrival, according to the principal. He said he also had to “let go” the vice-principal, who was the nominee, in his second week.

“So we had an absolutely unfair experience of being inspected, we were just trying to help the college.”

The college was under FE commissioner intervention. It was inspected by Ofsted in March 2018, received a second grade three and subsequently merged with Sandwell College in November 2018.

Cropley told college leaders, and the FE commissioner Richard Atkins, who was present at this week’s AoC event, that an improvement would be to “find a way for Ofsted to be constructive if we can”.

He added: “I suggest at every opportunity I have, really thinking about how Ofsted can work with the colleges in financial intervention to help them keep an eye on the quality as they are going through these horrendous cuts and challenges that they are having to implement.

“How they are supported and how their understanding… make sure that the quality isn’t forgotten but isn’t a publically pronounced verdict of a previous regime that then impacts on the lives and livelihoods of the staff working in that college.”

His other suggestion for improvement was “consistency of FE advisors” and better “co-ordination of scrutiny” during college interventions.

“At Cadbury and Stratford we had the same people with us all the way through the system and that was really, really helpful. That’s not really the case at West Notts College.

“It is not terrible but I think it would have been more helpful if we had the same people all the way through.

Cropley added that, during the intervention at his current college, which has undergone a major restructure to make financial savings, the “learner record MIS team, between January and September, did not go for more than a week without some kind of external audit of what was going on in West Notts College.

“Inevitably in a financial intervention a college shrinks by about a quarter to a half where people are working hard and that scrutiny has an impact.”

Kate Webb, group principal at the Windsor Forest Colleges Group, was also on the AoC panel and said: “We are living in a system at the moment I think where there is an increasing threat and risk of harm, and failure starts to feel catastrophic.

“We need to make sure we don’t fetishise failure.”

Webb added that she was trying to put the teaching profession “at the centre of what we do” and emphasised the importance of “the moral character and purpose of the organisation”.

Cropley’s experience of a premerger inspection of a college in formal intervention is by no means unique. Prospects College of Advanced Technology (PROCAT) went into formal intervention following a notice to improve for financial health in January 2018.

The intervention was lifted once the merger with South Essex College completed on 1 February 2019, but not before Ofsted had come knocking on 4 December 2018.

And more than two weeks after PROCAT was dissolved, on 18 February 2019, Ofsted published its grade three inspection report.

Ofsted was asked if it agreed that the colleges were inspected unnecessarily, and if it believed the supportive aspects of the intervention regime were undermined.

But, owing to pre-election restrictions, a spokesperson directed FE Week to Ofsted’s inspection deferral policy published in June 2016, which says: “Ofsted puts the interest of children and learners first and it is only in exceptional circumstances that Ofsted would consider granting a deferral of inspection.”