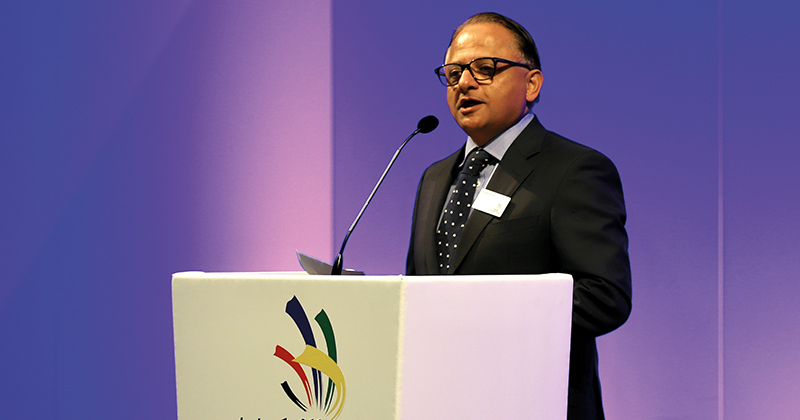 Ex-Greene King boss Rooney Anand spoke of his excitement today as he made his debut as WorldSkills UK chair on the first day of the organisation’s LIVE! event.

Anand told VIPs at a business breakfast at the Birmingham NEC, where the event is being held: “I hope, like me, you are very excited by what happens over the next three days in Birmingham.

“I believe passionately that business leaders must help young people fill their potential and WorldSkills is one of the very best vehicles through which we can do that.

“It is the only vehicle that captures and leverages in the field of skills building.”

Anand took over from former WorldSkills UK chair Carole Stott in January. He stepped down as chief executive of Greene King after 14 years in April.

The businessman told those at the breakfast: “Our job here, all of us, is to help young people take that crucial first step on that career ladder.

“WorldSkills is unique because it brings together educators, business, government and young talent of the future – the whole skills system under one enormous roof. So together we can explore what we can all do to help so that young people get on.

“We don’t just believe we make a difference – we do.”

The sentiment was echoed by colleges that had stalls and activities running at the event.

Dudley College’s curriculum manager, Dennis Stephens, told FE Week: “There is nothing greater than when you see them when they have won. It’s fantastic.”

The college has been involved with WorldSkills UK for “numerous years”, Dennis said, and has competitors in hair and beauty and construction metalwork taking part in this year’s national finals at WorldSkills UK LIVE.

The finals are being used by WorldSkills UK to help find the team to take to WorldSkills Shanghai in 2021, where skilled young people from the UK will compete against those from other nations.

Dennis continued: “We have promoted WorldSkills within the college, we dedicate lessons to it and have got WorldSkills champions to spend time with the tutors.” This is “really invigorating for them”.

Dudley has taken 1,600 staff and learners to the show this year and he believes it is “worthwhile” and a “great experience”.

He added: “The staff enjoy it. They volunteer to come down and do as much as they can.”

Leicester College’s digital and events team leader, Wajeeda Yusuf, said that her college got involved in WorldSkills as they believed “it was important to showcase vocational study, as well as academic study”.

She continued: “There are some amazing competitions happening around the NEC at the moment and it’s great for us to be involved.”

Around 280 businesses are present at WorldSkills UK LIVE – including the British Army, which has brought armoured vehicles, a live band and a climbing wall.

Halesowen College had a lively trade offering face painting for the throngs of schoolchildren who attended today.

Ben Blackledge, deputy chief executive of WorldSkills UK, said: “Twenty thousand jobs, apprenticeships and training courses – all under one roof. This is an exceptional opportunity for anyone looking to secure skills and a rewarding career.

“We want to give young people an inspirational insight into what their future career could be, and by working with the UK’s leading employers, education and training organisations at LIVE they can access careers advice and see the skills they need to reach their full potential.”

FE Week is the official media partner of WorldSkills UK LIVE and is providing live coverage from all three days of the event.