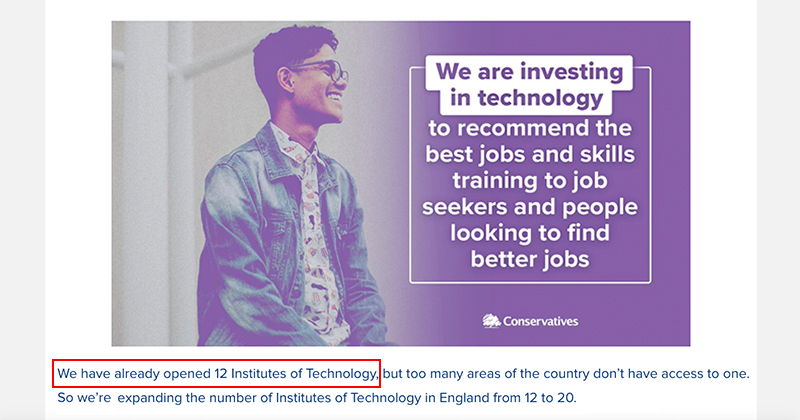 The Conservatives have promised to rectify a misleading claim it has made about further education in the build-up to the general election.

In a post on the political party’s website (pictured above), a page called ‘share the facts’ states: “We have already opened 12 Institutes of Technology, but too many areas of the country don’t have access to one.

“So we’re expanding the number of Institutes of Technology in England from 12 to 20.”

The Conservatives have, however, only announced their intention to open the institutes. The majority have not actually opened to date.

After FE Week raised this with the party, a spokesperson admitted this was an “error” and said its website would be updated accordingly. The website had not been updated at the time of going to press.

In an article for The Times entitled Don’t let Labour take charge of our children’s schools, Williamson said: “As the first education secretary to have attended an FE college I have a real drive to transform vocational and technical education for 16-19-year-olds.”

The Department for Education has been approached for comment about Williamson’s false claim.

His article came a day after Sir David Norgrove, the chair of the UK Statistics Authority, wrote to all political parties asking them to “ensure that the use of statistics during this general election campaign serves the public good”.

“My predecessors and I have in the past been obliged to write publicly about the misuse of statistics in both pre-election and pre-referendum periods,” he said.

“Statistics can be a powerful support for an argument but misuse damages their integrity, causes confusion and undermines trust. It can also lead debate to focus too much on the statistics themselves, distracting from the issues at hand.

“This is particularly important during the intense public scrutiny of an election campaign, where misinformation can spread quickly.”

And yesterday, fact-checking organisation Full Fact branded the Conservatives “irresponsible” for a misleading edit of an interview from Good Morning Britain with Labour MP Keir Starmer that was widely shared on social media.

Conservative chairman James Cleverly tried to defend the edit this morning, and claimed it was done in a bid to “shorten” the clip.

FE Week reporter Fraser Whieldon will be keeping an eye out for misleading and false FE facts from political parties during the upcoming general election.

If you spot any, email them to fraser@feweek.co.uk. You can also vote for which Fraser face best represents the #FEFactfail on Twitter here.