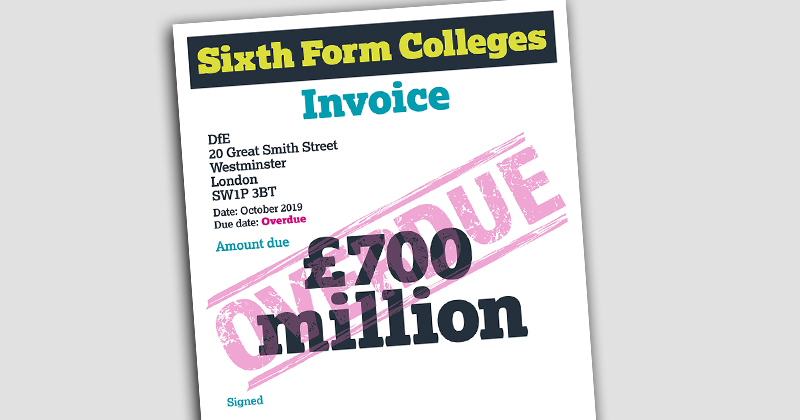 Sixth form college staff will march on the Department for Education tomorrow and hand officials an invoice for £700 million – the amount they believe is still needed for the post-16 sector.

Up to 200 National Education Union members from 25 sixth form colleges will head to the department’s London offices.

The NEU says the £700 million is needed on top of the £400 million in additional funding the government promised for 16 to 19 education in August, which the NEU regards as an “empty promise”.

While sixth form college staff will be striking, none of their principals will be there in support.

The Sixth Form Colleges Association, which runs the Raise the Rate campaign calling for more 16 to 19 funding, said the leaders are not backing the action as it will disrupt teaching.

Bill Watkin, chief executive of the SFCA, said: “It is important to note that this strike action is not targeted at the colleges.

“The NEU is a key partner in the Raise the Rate campaign and although sixth form college principals are equally committed to securing an increase in funding, they do not support this industrial action.”

Commenting on the action, the NEUs joint general secretary Kevin Courtney said: “Our sixth form colleges and the staff who work in them have been hung out to dry by this government.

“Sixth form colleges have always been a beacon of quality, but funding cuts have had a savage impact on pay, conditions and jobs and have driven far too many colleges towards merger or closure.

“Strike action is always a last option but our members believe that it is necessary in order to solve our dispute and help save the sector.”

Courtney will be speaking at the event, alongside his fellow general secretary Dr Mary Bousted and shadow further education minister Gordon Marsden.

A total of 84 per cent of NEU sixth form college members voted for the action in a ballot which closed in September; and colleges which reached the 50 per cent turnout threshold will be involved.

This event marks the beginning of strike days which will continue into November, with action possibly taking place on 5 November and 20 November.

“With the NEU only gaining threshold support in 25 out of 87 colleges where they balloted for strikes, it is clear that this strike does not have the wholehearted support of union members.

“The decision to strike is especially discouraging given we have committed to increasing 16-19 funding in the 2020/21 academic year by £400 million – the biggest injection of new money in a single year since 2010. This is in addition to funding the additional costs of pension schemes in 2020/21.

“We are committed to an ongoing dialogue with the NEU and I have already met with the joint general secretaries to discuss how we can avoid disruptive strike action in the future.”

The 25 colleges taking part are: