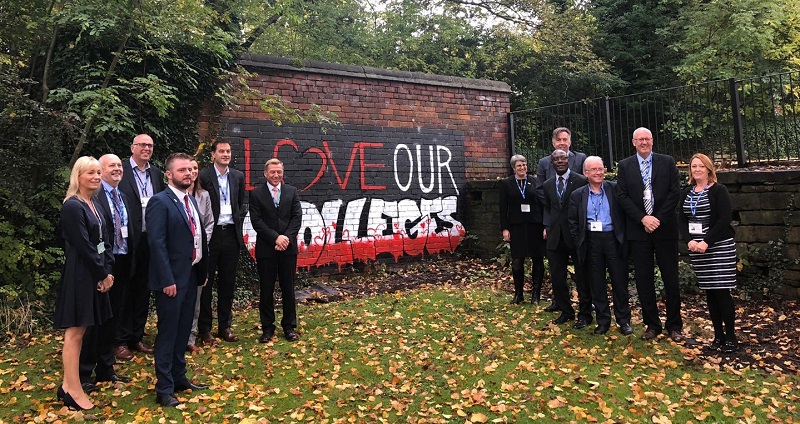 The group, who were hosted by Chesterfield College’s principal Julie Richards, posed in front of a Love Our Colleges graffiti mural which was created by level 3 graphic design student Mikey O’Connell last year. He is now studying illustration at the University of Bristol.

The college released a video to celebrate the Love Our Colleges campaign in May and is planning to share a new video at the end of this week.

Representatives from the Association of Colleges, who run the Love Our Colleges campaign, also headed to Chesterfield to participate in the meeting, which discussed their approach to lobbying for greater recognition and investment in colleges.

Shane Chowen, the AoC’s area director for the east and west midlands, said the campaign this year is “coming at a very important time because we have a budget coming up at the end of November”.

Colleges Week runs from 14-18 October and will see colleges across the country hosting local events and speaking to their local MPs.

Bedford College principal Ian Pryce has marked it by adapting Queen’s Somebody to Love and performing College to Love.

It’s #LoveOurColleges Week
Any excuse for a hasty theme tune
A College to Love produced by @ViolinAndrew https://t.co/YVxppZhVDh

Welcomed by Sunderland College’s chief executive, Ellen Thinnesen, Agnew was taken on a tour of the campus’ facilities and discussed “how the college is improving student experience through greater industry engagement”.

“From what I’ve seen today, Sunderland College is brilliant at fostering that talent in young people, making sure they gain high quality skills they need to succeed and it was great to meet some of the apprentices who will no doubt be the next generation of engineers and mechanics,” Agnew said.

People across the country are celebrating Colleges Week in various ways. Here’s a selection of tweets so far:

This #LoveOurColleges week we joined forces with employers from varying industries to initiate the launch of our Employer Academies.

This is a new initiative designed to prepare students for the world of work. 💼

Thanks to Tracy from @Village_Hotels for taking time out to see how @WirralMet works with thousands of local students to change lives. Really enjoyed your visit, thank you Tracy 👏 #LoveOurColleges pic.twitter.com/W3pUPxYOch

🚀 🚀 🚀 Our Level 2 Science students are learning about rockets as part of our amazing #IgniteTheSpark event – thanks to everyone at @UKSpaceAcademy for coming along to give such an incredible insight.

Partnerships such as this are another reason to #LoveOurColleges. pic.twitter.com/IJ19mTupso

Not bad for a lad from a council estate in receipt of FSM throughout school https://t.co/RhunMEtgtB