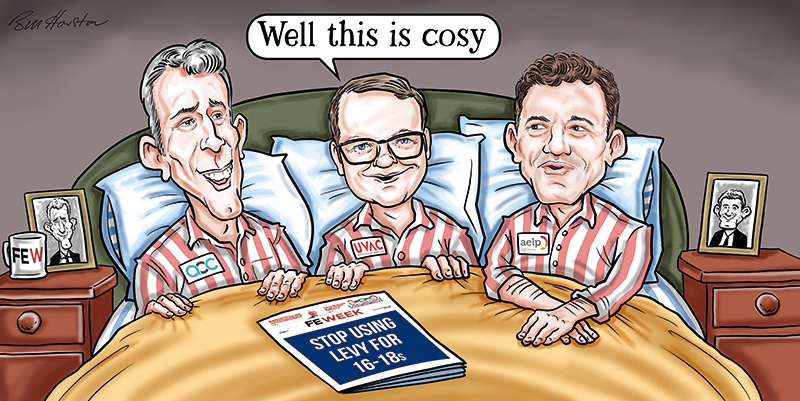 Three leading associations from across the university, private provider and college sectors have united to call on the government to fund 16 to 18-year-old apprentices through general taxation.

The membership organisations, who often hold divergent views, agree that the apprenticeship levy should not be used to subsidise this age group.

They say that this cohort should instead be guaranteed government funding just like A-levels and the incoming T-levels.

The University Vocational Awards Council (UVAC) has pleaded the case in a recent letter to education secretary Gavin Williamson, while the Association of Employment and Learning Providers (AELP) made the call in a policy paper they published last week.

Leaders at the Association of Colleges (AoC) say they’ve also recently been campaigning for this change.

“It is to say the least a little odd that the state pays through general taxation for A-level, T-level and applied general provision for 16 to 18-year-olds, but employers are expected to pay through the levy for apprenticeship provision for this cohort. Why?” UVAC chief executive Adrian Anderson told FE Week.

“Secondly, employers, through a productivity tax, the apprenticeship levy, shouldn’t be forced to pay for programmes for this ‘guarantee group’, tackle the NEET (Not in Education, Employment, or Training) problem or indeed pay the price of the failure of schools system to ensure individuals after 11 years of compulsory education gain a full level 2 qualification.”

He added that removing 16 to 18-year-old apprentices from the levy would allow employers to focus on using it to fund programmes “that are needed to raise productivity, as was the point of the levy when originally introduced”.

AELP chief executive Mark Dawe said that the levy “should never have been used as an excuse to exempt 16 to 18 apprentices from the government’s guarantee to fund all learners in this age group”.

However, he warned that even if the right to full funding is restored, “it still won’t relieve, by a long chalk, the pressures on the levy that the demand for higher and degree apprenticeships is exerting”.

Previously, the AELP and UVAC clashed over what the levy should fund after the Institute for Apprenticeships warned in December 2018 that the apprenticeship budget could soon be overspent.

The National Audit Office later said there is a “clear risk” that the apprenticeship programme is not financially sustainable after finding levy-payers are “developing and choosing more expensive standards at higher levels than was expected”.

After this, in March, the AELP called for all level 6 and 7 apprenticeships, including those with integrated degrees, to be removed from the scope of levy funding to relieve pressure on the budget.

A month later, Anderson said it is “entirely unacceptable” to expect public sector employers to subsidise low-level apprenticeships for chefs and hairdressers, and called on government to better support levels 6 and 7 instead.

Dawe believes the higher education loans system should be used to fund these levels, which would free up an estimated “£600 million a year for level 2 to 5 apprenticeships based on the starts this year alone”.

He added: “A decision not to tackle the pressures would ultimately lead to few or no new starts for degree apprenticeships and the universities I’m talking to increasingly recognise this.”

Deputy chief executive of the Association of Colleges, Julian Gravatt, said it was “great to see UVAC calling for a consistent form of 16 to 18 funding that is accessible to all young people regardless of the route they choose”.

“It’s something AoC have been campaigning on for a while,” he added.

“The wider point to make clear however is that 16 to 18 apprentices should feel confident of guaranteed money through DfE ring-fencing of funds. AoC would support a shift from the government that placed consistent priority on the funding of training for young people, new to work.”

A Department for Education spokesperson said: “The apprenticeship levy was introduced to tackle employer underinvestment in skills.

“We want to make sure that the levy continues to help develop the skilled workforce businesses need to grow and have sought views from a range of employers on the operation of the levy after 2020.”