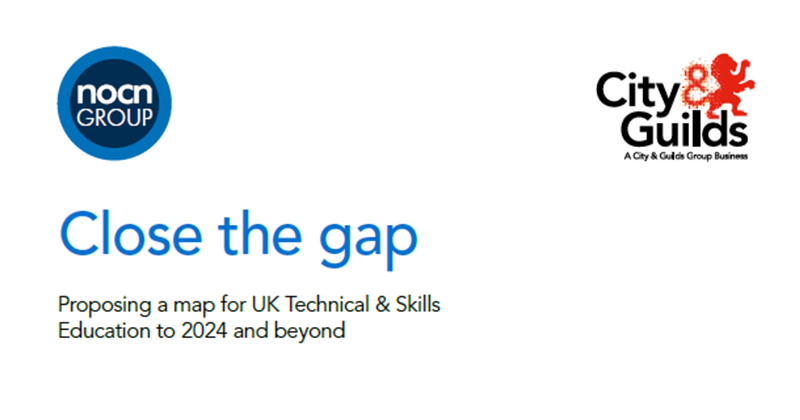 Government ought to invest in upskilling people on to level 2 qualifications or apprenticeships as a priority, a new report has recommended.

Close the Gap, a wide-ranging report joint authored by awarding bodies NOCN and City & Guilds, says the investment is necessary to provide a stepping stone to the next level for learners at every stage and age.

It warns that over the next five to ten years, there will be a “major skills gap” in the growing number of associate professional, scientific and technical jobs, particularly at levels 4 and 5 – which the authors call the ‘Missing Middle’.

The report says the current overall reduction in “operative skill” grade apprenticeships (level 2) is “making the problem worse, as the ability to progress up to and beyond level 3, 4 and 5 has become severely restricted”.

It calls on the government to launch a campaign to “recognise and encourage level 2 apprenticeships or qualifications in the economy”.

NOCN managing director Graham Hasting-Evans said government currently “does not seem to understand” that people must be taken from level 1 to level 2.

“You are not going to be able to take them to levels 4 and 5 where there will be jobs. You have to move them up from level 1 to level 2 first.”

The recommendation builds on work from organisations such as the Association of Employment and Learning Providers (AELP) to encourage more starts at level 2 – it has previously called on the government to fully fund apprenticeships at levels 2 and 3.

FE Week analysis of government statistics in July revealed level 2 starts have dropped by more than 50 per cent since the apprenticeship reforms were introduced. The Department for Education commissioned an investigation in December to understand what is behind the drop.

AELP chief executive Mark Dawe said: “AELP very much welcomes the call for a coherent strategy around getting more people skilled to at least level 2 and in our view, apprenticeships are the cornerstone on which the strategy should be built.”

Seeking to set the agenda for a “single, simple, integrated and economy-led technical and skills development scheme” – known as a ‘TVET system’ (technical and vocational education and training) internationally – Close the Gap features a number of other recommendations for tackling skills shortages in England.

Once an adult achieves their level 2 qualification, for example, the government ought to fully fund their first level 3, the report says.

Another proposal is for recent reforms to TVET, such as apprenticeships, T-levels, and functional skills, to be brought into one system championed by a single organisation – the Institute for Apprenticeships and Technical Education (IfATE).

By doing so, IfATE should be accountable for management of public investments and quality, while still being “owned” by stakeholders.

The government should also close the funding gap between FE and HE as a priority, the report says, after the disparity was highlighted in the Augar Review.

And after the AELP complained funding for apprenticeships at small-to-medium enterprises was being gobbled up by levy-payers, the NOCN and City & Guilds has said the government should reduce the floor of the apprenticeship levy from companies with a £300 million payroll to make more companies pay the charge. This is needed, the report says, to match smaller businesses’ demand for apprenticeships.

The report also proposes an “upskilling levy” to help continuously develop employees’ skills, saying: “It is unlikely there will be sufficient public expenditure available to match the significant scale of upskilling needed for the economy to manage a transition from the skills profile of today’s workforce to that needed in five to ten years’ time.”

“Accordingly, we suggest the government considers introducing an Upskilling Levy, similar in concept to the current apprenticeship levy, but for companies upskilling their existing employees.”

This levy would be set at the same level as the current apprenticeship levy, 0.5 per cent of payroll.

The upskilling levy would fund people moving from level 3 up through 4 and 5 and include specific management development programmes.

The Close the Gap report will be launched at today’s Skills and Employability Summit in London.