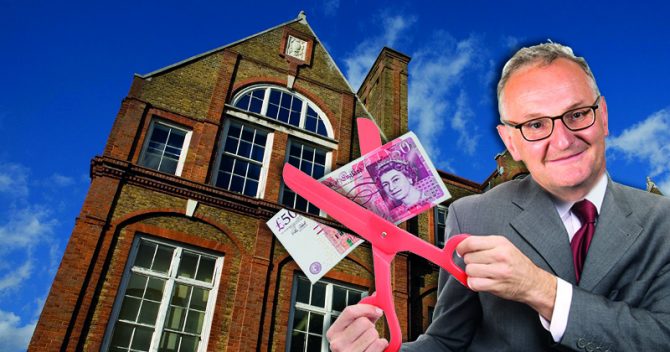 Controversial minister Lord Agnew has been given responsibility for a new college financial warning system, as well as oversight of FE Commissioner’s office.

The unpaid minister for the school system has from today taken on the FE “provider market, including quality and improvement” and this afternoon the Department for Education confirmed this includes a new financial modelling programme as well as the college intervention regime.

He will also lead on EU exit preparation, delivery of the careers strategy, and safeguarding in schools and post-16 providers.

Agnew is a venture capitalist who made much of his fortune outsourcing jobs to India. He is a former Department for Education non-executive board member who founded the Inspiration Trust chain of academies.

He’s become controversial in the schools sector owing to his cost-cutting ideas, and criticised for his insistence that schools can continue to save money on back office spending, when many headteachers warn their budgets are already cut to the bone.

In November 2018 he told a conference he would bet any headteacher “a bottle of champagne and a letter of commendation” that he can identify more potential savings in their schools.

At the same conference he reportedly claimed that school resource management advisers, who were parachuted into schools under a trial scheme in 2017 to help them to cut costs, found £35 million of “essentially misdirected resources” at 72 schools and academy trusts, which amounted to a “colossal sum of money”.

He has since extended the trial with £2.3 million extra funding to provide at least 160 advisers.

In March this year, FE Week’s sister paper Schools Week revealed how Agnew’s cost-cutting consultants told a school to replace experienced teachers with support staff on term-time contracts, while another was urged to limit lunch portions for pupils.

One FE job that has already fallen on Agnew’s lap is a new early warning system for college finances.

Announced on Thursday, the Education and Skills Funding Agency said college financial returns will be consolidated into a single annual return from January 2020.

Providers have historically submitted their financial returns at least twice a year.

The ESFA claimed this will help college governors, and the agency, “spot signs of declining financial health and ensure preventative action can be taken at an earlier stage”, but is yet to specify exactly how this will be the case.

The move comes just weeks after the ESFA announced that Dame Mary Ney would lead a review into the way the government monitors college finances, including the role of the FE Commissioner, and less than a month after the National Audit Office said they were also preparing to launch a value for money review on the management of colleges’ financial sustainability.

Agnew is the third minister to take on an FE brief in Boris Johnson’s new government, after the prime minister failed to appoint a dedicated skills minister in his reshuffle when Anne Milton resigned.

Badenoch has, however, now gone on maternity leave and had her responsibilities taken over by Michelle Donelan in the interim.

Donelan will support Williamson, including in areas such as the delivery of T-levels, apprenticeships and adult education.