The government’s effort to raise awareness of T-levels has been criticised after new research found three in five parents still haven’t heard of them, just 12 months before they’re due to be rolled out.

A survey of 824 parents with children aged 11 to 18 in England, commissioned by the Chartered Management Institute, also revealed that only 1 in 10 (11 per cent) feel they know a lot about the new post-16 technical qualifications.

Marketing drives to raise awareness have been lacking from the Department for Education, which only launched its official branding – NexT Level – in May.

Government will need to accelerate work to raise awareness with students, parents and employers

When challenged over the survey’s findings, the DfE said they would be launching a fresh “nationwide campaign” to raise awareness next month.

Public relations firm Havas Worldwide London Ltd won a contract to design the T-levels logo for £250,000 and has since been given access to £3 million for the implementation of the campaign in 2019/20.

The DfE has not said what this campaign will involve.

A YouTube video, which explains what T-levels are, was published by the DfE last year but has only had just over 11,000 views to date, while a similar video launched last month only has 970.

Rob Wall, head of policy at the Chartered Management Institute, said for T-levels to succeed, government will “need to accelerate work to raise awareness with students, parents and employers”.

“We know government is planning to launch an awareness campaign. And we support this. We just hope this isn’t too late,” he added.

While some individual colleges have launched, or are gearing up to launch their own T-level awareness raising campaigns, some say they themselves do not have enough information about the new qualifications.

Boston College has been piloting the controversial 315-hour minimum industry placements for T-levels, but due to various concerns, they’ve yet to market or even sign up to offer them.

Principal Jo Maher said: “There is not enough information on the content and assessment of T-levels to go to market at present, even for providers aiming to build initial interest for a 2021 start.

“In order to give the best information, advice and guidance to prospective students and parents, providers need access the program specifications and I have not yet seen any.”

Oldham College, which is set to deliver T-levels in wave two of their roll out in 2021/22, is attempting to get ahead of the curve.

Using grant funding they received as a provider in one of the DfE’s “opportunity areas”, the college bought a T-levels branded van, built with TVs inside to explain what the new qualifications are.

It cost them between £25,000 and £30,000 to “get it fully kitted out” and will be driven around the town over the next few years to raise awareness.

Principal Alun Francis said the college has only had it for one week, so “I can’t tell you if it’s had any effect.

“But we’ve done it because there’s a real job to do about making sure people understand properly what the alternative options [to academic qualifications such as A-levels] are.” 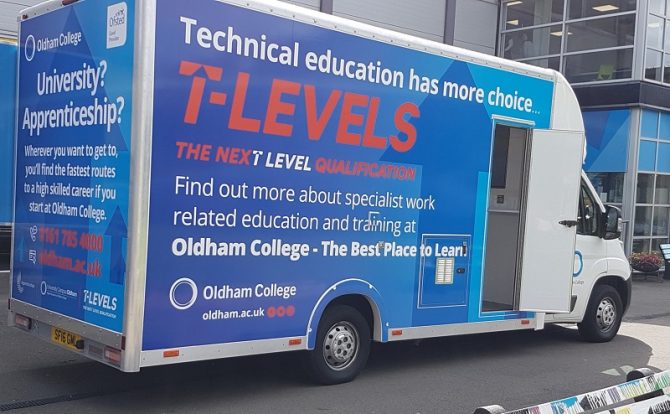 He told FE Week he’s not aware of a “full-on marketing strategy” from the DfE or other colleges at this stage and his college is “very much at the beginning” of building its own strategy.

Asked if he thought the DfE was leaving it too late to launch its big awareness campaign, Francis said: “It’s difficult to strike the balance because if you have a huge campaign talking about them all the time that’s too far away, you kind of lose the impact. There is a little about managing the time so there is a build-up.”

Chichester College will deliver the first T-levels from 2020 and is now gearing up to launch its own marketing drive.

Its strategy includes deployment of its school liaison officer across the local area, a targeted T-levels open day for prospective students, and pushing out adverts over the radio.

Paul Rolfe, group director of commercial, sales, marketing & public affairs at the Chichester College Group, said: “The qualification landscape is complex for parents, so face-to-face marketing delivered by our expert staff, supported by online resources will be key to our marketing activity.”

A DfE spokesperson said: “Right from the start we have worked closely with both large and small businesses to make sure we get the delivery of T-levels right.

“We are implementing T-levels in a measured, phased rollout – and our communications campaign will ramp up as coverage grows across the country.

“We will be launching a nationwide campaign next month to help raise awareness of T-levels among young people, parents and employers.”