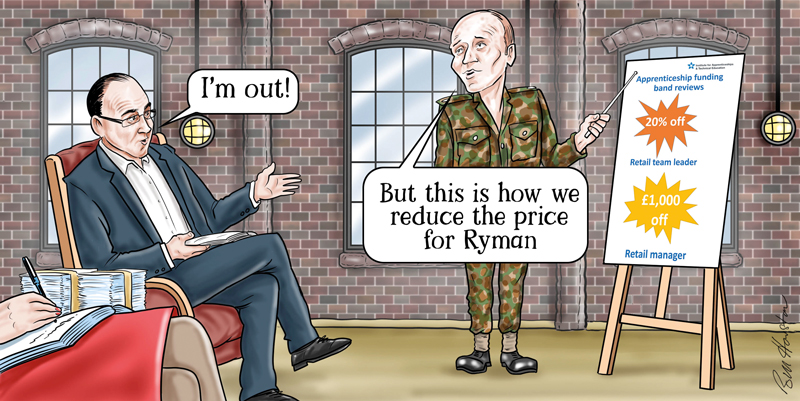 Paphitis told FE Week that reducing those funding bands is “damaging to the quality apprenticeships we want to offer”, as it will mean training providers could struggle to provide learners with the breadth of learning experience that Ryman would prefer.

The stationery giant may be forced to pay top-ups to finance the programme it wants providers to deliver, Paphitis said.

He added: “We are great believers in quality, not quantity. Reducing the costs will make it even harder for some companies to spend their pot in the way it was originally intended.”

The retail apprenticeships were two of 17 standards that had revised funding bands published this week, following a review by the IfATE.

This latest stinging criticism of IfATE’s decision-making will not be welcomed by skills minister Anne Milton, who told FE Week she wanted the quango to have a much more “collaborative relationship” with providers.

There is little sign of that this week, with hospitality apprenticeship provider HIT Training accusing the institute of engaging in a “race to the bottom”.

Two level 3 hospitality standards have been cut from £5,000 to £4,000 this week: hospitality supervisor and senior production chef.

A spokesperson said the institute “always call on us for support when there is a funding band review, but frankly, it seems that in spite of providing a significant evidence base, they invariably choose the cheapest option”.

“We will cut our cloth to suit, but it is a real pity high-quality provision will be removed from the sector,” they added.

The cuts may mean training providers decide these two standards are not viable to run, warned the standards’ trailblazer group representative, head of fleet at First Bus Jon Harman.

Of the 17 new funding bands published this week, only one standard had an increase: the level 3 highway electrician/service operative, from £9,000 to £12,000.

Six remained the same, while ten have had cuts.

There have been two funding band reviews, in May last year and the following December, which have led to several standards having funding cuts, including the popular chartered manager degree apprenticeship.

An IfATE spokesperson said: “The aim for all standards reviewed is to ensure they have the most appropriate funding band to support high-quality delivery, and provide value for money for employers and taxpayers.

“Each standard has been considered on its own merits following the same approach used throughout the review process to ensure consistency.”

The spokesperson said IfATE had worked collaboratively with trailblazer groups and collated evidence that was used fairly and in a balanced way.

“We welcome feedback and will assess the impact of any changes to funding bands over the coming months, taking action where appropriate.”