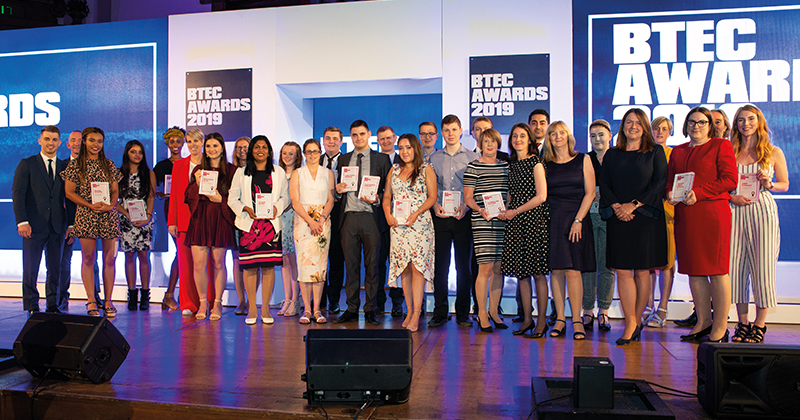 The winners of the ninth annual BTEC Awards have been recognised at a ceremony featuring performances, celebrity appearances and a bucket load of vocational talent.

Awards were presented to 21 winners in 20 categories, following deliberations by an expert panel of 52 judges, including the managing director of FE Week publisher Lsect, Shane Mann.

The winner of the creative media student of the year award, Sam Pope from The Bath Studio School, was described by his teacher as a “serious talent” who “goes beyond what is expected” while mentoring classmates too.

His short films have even landed him a role in an upcoming professional feature film by award-winning director Kae Bahar.

The awards were held in Westminster and run by Pearson, and its president in the UK, Rod Bristow, said: “All of those that won this year deserve huge congratulations and stand every chance of continuing that success into the careers they are now ready to start.

“This year’s awards are a fantastic celebration of them, alongside the schools, colleges, universities, training providers, and employers, who have underpinned their efforts.”

Hosting the awards was TV’s Steph McGovern, and the ceremony was also attended by Olympic gold medallist Max Whitlock, presenting the award for School of the Year.

The winner of the business and enterprise student of the year award, Ttanya Sachdev from Braeburn International School Arusha in Tanzania, earned her award after starting her own tuck shop business for teachers and students.

Performing at the ceremony were the four winners of the Showstopper Challenge, groups from schools and colleges offering BTECs in the performing arts: Deanery High School, D16 Performing Arts College, Jackie Palmer Academy and Bury College.

In a recent poll, Pearson has found that two thirds of medium sized businesses have hired BTEC graduates in the last five years. One such graduate is the winner of the hospitality, travel and tourism student of the year award Luke Bearpark from Exeter College, who has landed himself a job on the international cabin crew for British Airways.

Another college winner was East Surrey’s Francesca Horn, the winner of the art and design student of the year gong, whose work has previously been featured on BBC News.

The winner of the child, health and social care student of the year award, Teanna Maguire from Sir John Deanes sixth form college was described as a “shining star” with an “exemplary work ethic”.

Kasra Soltani, only came to England four years ago, yet his time and effort at Croydon College earned him this year’s construction student of the year award.

Shalini Rajan, the winner of teacher of the year, was said to be “empowering her students by embracing modern teaching and learning strategies” at The Winchester School in Jebel Ali in the United Arab Emirates.