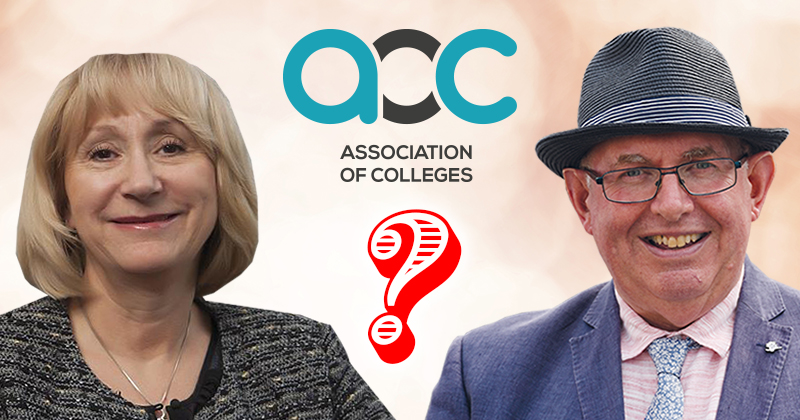 The race to decide the next Association of Colleges president has taken another turn, after the challenger candidate pulled out – on the last day of voting.

However, owing to “personal reasons”, she has withdrawn.

“Due to personal reasons I am withdrawing my application to become president of the AoC for 2019/20,” she told FE Week.

“The AoC continues to play a vital role in, and for the sector and I would like to take this opportunity to wish the new president every success for the upcoming term where I will continue to offer my full support as principal and chief executive of The Trafford College Group.”

The AoC has since confirmed that Frampton will continue as president into 2019/20.

“I really do #LoveOurColleges,” he said today. “I have loved being your AoC President this last year and I am thrilled to have the honour for another year.

“I would like to personally thank Lesley for a great contest and wish her all the best. She is a great champion for our sector, and I know that she will continue be so.

“This has been one of the privileges of my life.”

David Hughes, chief executive of the AoC, said: “This is a really exciting time for AoC and for the sector so I am delighted that Steve will be onboard as president for another year. It was a shame that Lesley had to pull out, for personal reasons, and I want to thank her for putting herself forward.

“Steve has made a big impact over this last year, bringing with him enormous amounts of energy, enthusiasm and dedication, not least to the Love Our Colleges campaign. I know that he’s got lots he wants to achieve over his final year as president and I look forward to working with him on it.”

Frampton, the former principal of Portsmouth College, reapplied for the role after having completed one year of his two-year term, under rules introduced after Ian Ashman served the previous maximum one-year term in 2017.

Every college which is an AoC member got one vote in the election; which must run over a two-week period.

Davies was the first person to challenge an incumbent president of the association under the new rules.

Ashman’s immediate successor, Alison Birkinshaw, served only one year as president before retiring. Frampton was elected, unopposed, to replace her in May 2018.

She had intended to stay on as principal if she was elected AoC president.

In her election pitch, Davies promised to work on behalf of association colleges to “ensure government puts the long-term sustainability of colleges at the heart of its policymaking”.

During Frampton’s tenure, the association has helped shape the new Ofsted inspection framework, worked with the DfE on teacher recruitment and retention strategies, and launched the #LoveOurColleges campaign.

In his re-election pitch, he said serving as president was “great privilege” and he was “excited for the task ahead”, referring to making sure colleges were in the strongest possible position for this year’s Comprehensive Spending Review.