The first winners from a devolved adult education budget (AEB) competitive procurement process have been told the good news.

The list of 21 providers (see below) which have been awarded AEB contracts by the West Midlands Combined Authority (WMCA) has been sent only to the providers, but has also been seen by FE Week.

WMCA is one of seven combined authorities which is due to take control of the adult education budget for its area from the 2019/20 academic year.

From August, the ESFA will transfer responsibility for the adult education budget for the WMCA area to the authority, which is worth £125.6 million in the 2019/20 academic year.

WMCA put up to £28m of its overall AEB out to competitive tender, with minutes from a meeting of the authority’s board saying this was done in January. The minutes also say the contracts were due to be awarded in April and provision is scheduled to commence in September 2019.

The contracts from this procurement are intended to be awarded for an initial period of one year, with an option to extend for a further two years.

A spokesperson for the West Midlands Combined Authority told FE Week “After confirmation of award on May 27, the next stage will be the on-boarding of providers. There may be further targeted commissioning where we see gaps in the overall market response.”

The tender was split into two lots: one focuses on tackling unemployment among young people and supporting priority groups such as care leavers, the homeless, and long-term unemployed people; another focuses on improving the skills of low-paid, low-skilled workers and increasing apprenticeship take-up.

The 13 separate providers chosen for the lots include Serco, the major public services contractor, which received a grade 3 in an Ofsted inspection of its apprenticeship provision, but redeemed itself by making ‘significant progress’ in two areas of an ensuing monitoring visit.

Advanced Personnel Management Group (UK) Limited, another provider for the workers’ lot, received a grade 3 at its last inspection, with inspectors finding tutors did not use information of most learners’ starting points well enough to identify their prior learning.

Phoenix Training (Midlands) Ltd received a grade 3 as well, and had to withdraw certain adult programmes after its plans to develop longer-courses and apprenticeships failed.

Several providers which have been chosen have not been inspected yet.

In addition to the 21 main providers, WMCA expects to be also supporting 46 subcontractors indirectly.

WMCA’s providers are the first to be revealed for any of the combined authorities that are taking over the adult education budget for their region this August.

The adult education budget mayoral board of the Greater London Authority endorsed a list of organisations to receive contracts in April.

The Liverpool City Region Combined Authority has agreed to award contracts to 19 bidders, subject to due diligence and contracts being signed and returned.

FE Week understands Tees Valley Combined Authority is currently in the final stages of funding awards and is expected to make a decision in the coming months.

The West of England Combined Authority is making decisions on allocations at its next committee meeting on June 14.

The procurement exercise being run Greater Manchester Combined Authority is still live, according to a spokesperson. 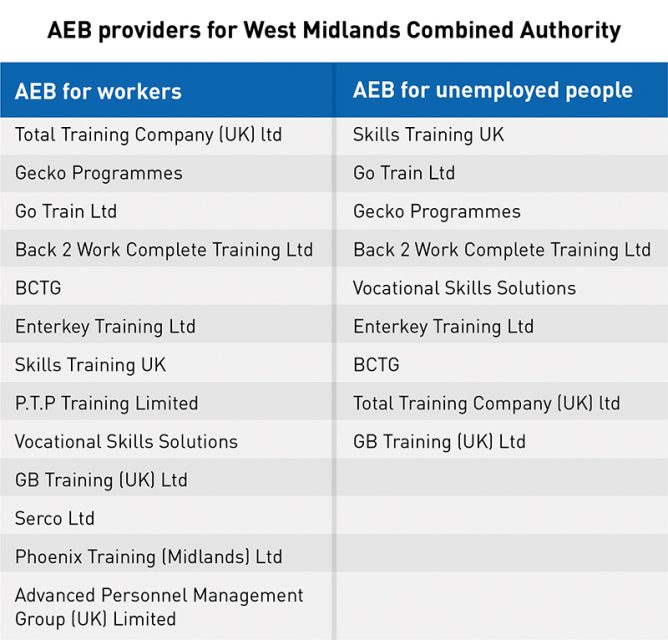