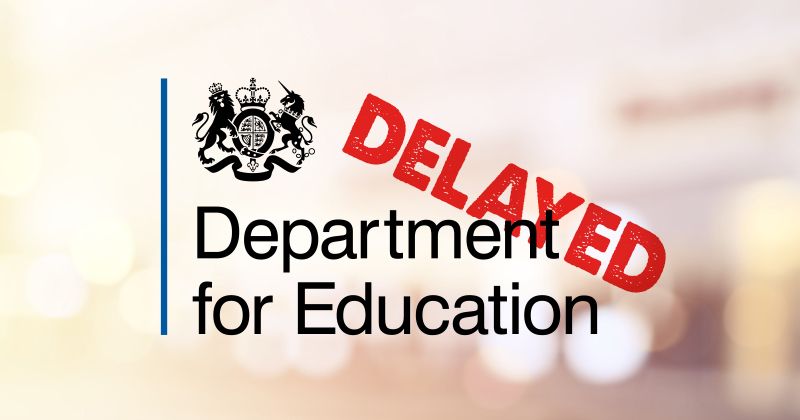 Two flagship apprenticeship surveys have had their publication date delayed by six months and will incur additional costs to the Department for Education.

This is because the supplier, IFF Research Ltd, had the deadline to finalise its research extended to July 15, 2019, despite being given an original publication date of the end of  March 2019.

Government protocol mandates that once research is finalised, it has to be published within 12 weeks.

Asked if its name should be the Apprenticeship Evaluation and Pay Surveys 2019 instead of 2018, the DfE said the titles for the surveys will be decided once the work is finalised.

IFF Research was contracted to design and question current and graduated apprentices, as well as employers, about satisfaction, motivation, benefits, retention and post-apprenticeship progression for the AEvS.

Meanwhile, the APS includes surveying current apprentices in England, Scotland and Wales about their pay, hours and training.

There were also delays to the  publication of the full report on the 2016 APS, which was finalised by suppliers in January 2017, but not released until July of that year.

When it was eventually published, it revealed that nearly one-fifth of apprentices at levels 2 and 3 were illegally paid less than the minimum wage.

An FE Week report published the same week found that it was likely that no one had been fined or prosecuted for illegally underpaying apprentices.

Following the revelations from the 2016 APS, the government’s director of labour market enforcement Sir David Metcalf gave warning that government enforcement agencies and industry bodies would work to better identify employers who underpay workers and punish them with severe jail sentences.

In addition to the delays to the 2018 surveys, the DfE will also incur additional costs from the APS, on top of the £535,535 plus VAT research costs, though the exact amount was redacted in the contract variation document.

The extra cash is needed, according to the document, because the survey interviews with 2,500 current learners were overrunning by two minutes so the DfE has agreed to pay to extend the interview length, rather than stick with the original budget by reducing the sample size by 320.

The costs will be published on Contracts Finder when the research is complete, a DfE spokesperson said, but until then they will remain commercially sensitive”.

Delaying the publication of the APS means that its final findings will not be initially included when the Low Pay Commission (LPC) makes its recommendations on minimum wage levels (which will take effect from April 2020) as the commission will stop taking evidence in June.

The LPC says it will make a recommendation to the government on the April 2020 level of the apprentice rate of the National Minimum Wage in autumn.

“We do not expect the delay in the Apprentice Pay Survey to affect this, and we will have early access to the data ahead of publication,” a spokesperson added.

The DfE said the Department for Business, Energy and Industrial Strategy, which is responsible for the pay survey, has handed the vast majority of APS data from the survey to the LPC for use in its report.