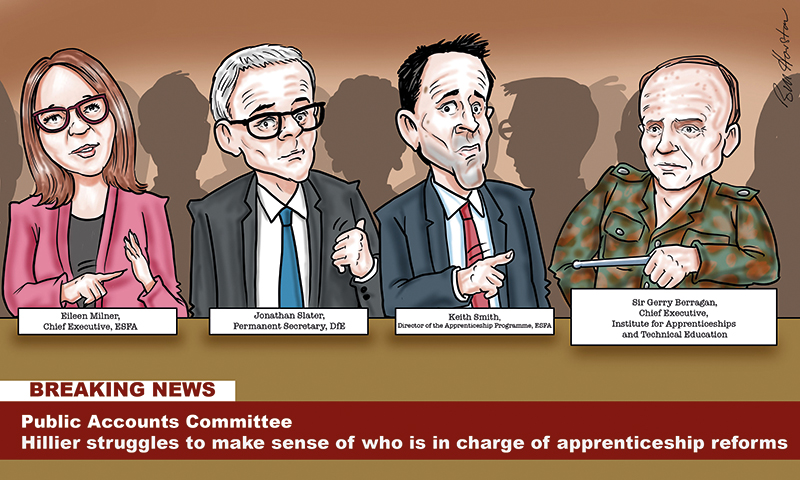 An influential House of Commons committee will grill officials on the future affordability of the apprenticeships programme on Monday.

The Public Accounts Committee will hear from the Department for Education’s permanent secretary Jonathan Slater, the Education and Skills Funding Agency chief executive Eileen Milner, the agency’s director of apprenticeships Keith Smith, and the chief executive of the Institute for Apprenticeships and Technical Education Sir Gerry Berragan next week.

The hearing, which will focus on “the value” of the apprenticeships programme and the effectiveness of its “oversight”, follows a recent National Audit Office report on the progress of the programme since the levy reforms in 2017.

Among its main findings, the critical report hit out at the ESFA for having limited assurance that apprentices were spending 20 per cent of their time doing off-the-job training – an issue that PAC chair Meg Hillier then singled out in her reaction to the report.

MPs are also expected to quiz the top civil servants on apprenticeship starts after the NAO found not enough potential recruits had been encouraged to start an apprenticeship by the DfE, and the number of starts fell “substantially” after the levy was introduced in 2017.

Between 2015-16, the last full year before the levy system kicked in, and 2017-18, the first full year after the system came into force, there was a 26 per cent drop in the number of starts.

The NAO also found that, although DfE has improved its performance measures, it is still not clear how it demonstrates the impact of the programme on economic productivity – something the PAC has criticised the government for in the past.

The future affordability of the apprenticeship system will arguably form the committee’s main line of questioning.

As revealed by FE Week in November, modelling by the Institute for Apprenticeships and Technical Education showed the apprenticeship budget could be overspent by £0.5 billion this year, rising to £1.5 billion during 2021-22.

The PAC might also revisit its own apprenticeships report from 2016 during the hearing, which concluded there was a risk the levy system may encourage stakeholders to “behave in ways that work against the objectives of the programme” by, for example, artificially routing other forms of training into apprenticeships.

In her annual report for 2018, Ofsted chief inspector Amanda Spielman warned of this problem when she said graduate schemes were being “rebadged” as apprenticeships.

The officials are due to appear before the committee at approximately 4.45pm.

The committee will be exploring the impact and effectiveness of government policy at the frontline, including the government’s relationship with employers and providers.