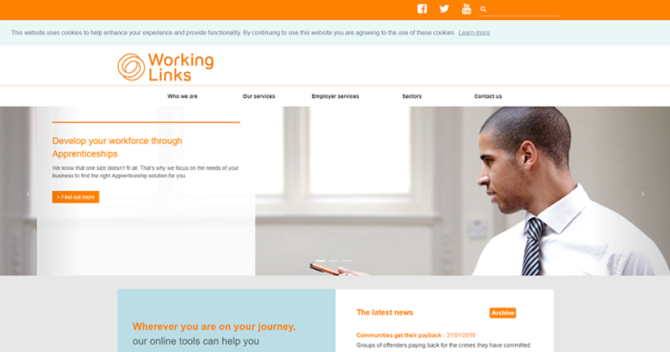 A major training provider with around 1,000 staff has called in the administrators, FE Week understands.

Working Links (Employment) Limited, which holds contracts across numerous government departments including around £2 million for apprenticeships and adult education, told their workforce yesterday afternoon not to come into work today.

It is understood that thousands of learners will be affected, including apprentices in the customer service and retail sectors, as well as adult learners for two colleges that it works as a subcontractor for.

Working Links has not responded to requests for comment but a source close to the company said its reason for going into administration was related to its contracts with the Ministry of Justice to deliver the Transforming Rehabilitation programme.

It is not known how much these contracts totaled for Working Links, but its website shows that it operates “Community Rehabilitation Companies” to run the government programme across Bristol, Gloucestershire, Somerset and Wiltshire, Dorset, Devon and Cornwall, and Wales.

The Inspectorate of Probation, which inspects this provision for the government, rated the centres covering Dorset, Devon and Cornwall as ‘inadeqaute’ in a report out today.

Working links was taken over by international investment firm Aurelius in June 2016.

Earlier this month Aurelius said it was going to transfer the Community Rehabilitation Companies to services company Seetec.

Seetec confirmed today that the staff at Working Links who work in the Community Rehabilitation Companies will not lose their jobs and will transfer to the new company with immediate effect.

The Ministry of Justice confirmed that Working Links has gone into administration.

“We were aware of Working Links’ financial situation and have taken action to ensure continuity of probation services,” a spokesperson said.

“That means probation officers will continue to be supported, offenders will be supervised, and the public will be protected.

“The chief inspector’s report on these CRCs lays bare their unacceptably poor performance and we will work closely with the new provider to urgently raise standards.”

The ESFA and Aurelius have both been approached for comment.

Working Links’ most recent set of accounts for 2016-17 show that its turnover declined by £25 million to £91 million.

The accounts add that since the year 2000 the company has helped around “300,000” people into employment.

Working Links was rated ‘requires improvement’ by Ofsted in 2013 for its apprenticeship and adult learning provision.