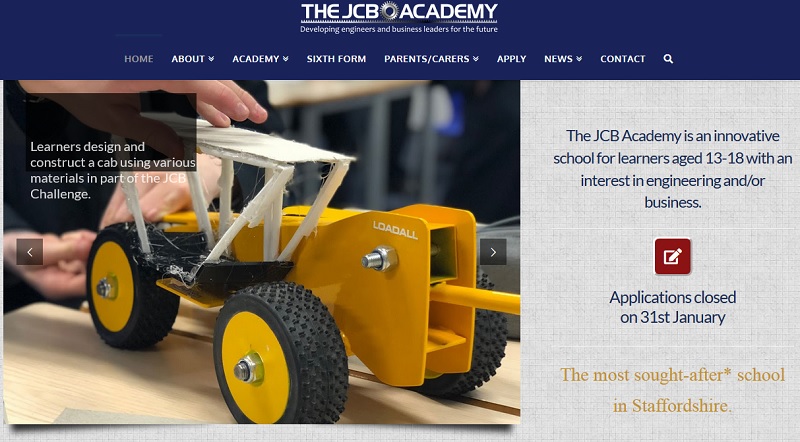 A flagship university technical college had to be bailed out by the government with a £650,000 loan, after being stung by funding rate cuts and delays to its apprenticeship programme.

FE Week reported last week that the JCB Academy – the first UTC to open, in 2010 – was one of six 14 to 19 technical institutions to receive ESFA bailouts last year, totalling £1 million.

Jim Wade, the institution’s principal, has now told this newspaper that the problems arose after it was forced to decide between running its apprenticeship programme on a third of the funding it had budgeted for – or not run a programme at all.

“We were in a difficult place, really, because the choice we had in August was do you turn around to 90 apprentices the week before they’re due to start their apprenticeship and say, sorry guys, ladies, we’ve got no programme for you?” he said.

A subsequent £720,000 funding shortfall led to the ESFA having to step in.

Its sponsor, JCB chair Lord Bamford, also agreed to up his contributions by an extra £250,000 a year for the next four years to cover the funding deficit.

The deficit “principally arose due to the costs of expanding the apprentice training programme and a lower level of apprentice funding per head than was originally forecast”, the accounts said.

Mr Wade said that the UTC, which delivers training for apprentices of all ages alongside its school activities, had previously been offering the level 2 engineering technical support framework.

Because of a funding cut in April 2017, it decided to switch to the new level 2 engineering operative standard – even though the standard was still awaiting approval.

Mr Wade said the UTC had 90 learners signed up for the start of 2017/18, and had budgeted £12,000 for each one, on the basis of information he’d been given by the trailblazer group developing the standard.

But when it wasn’t approved in time, the school was then forced to register all the learners on the framework instead – which resulted in an £8,000 shortfall per learner.

“We don’t aim to make a profit, so our aim with our budget is to more or less break even or create a small surplus,” he said.

The UTC has since redeveloped its apprenticeship programme, which covers the costs of delivery, and now has 376 apprentices registered on a range of standards.

Mr Wade said he was “confident” it would be able to repay the money, and wouldn’t need any further bailouts.

Many others of the 14 to 19 technical institutions – the brainchild of former education secretary Lord Kenneth Baker – have been plagued by problems since they were founded.

Eight have so far shut their doors, with a ninth earmarked for closure at the end of the year.

The majority have struggled financially after failing to recruit enough pupils, while quality is also an issue.

Around 60 per cent – or 21 out of 34 – of those that are open and have been inspected by Ofsted have been rated less than “good”.