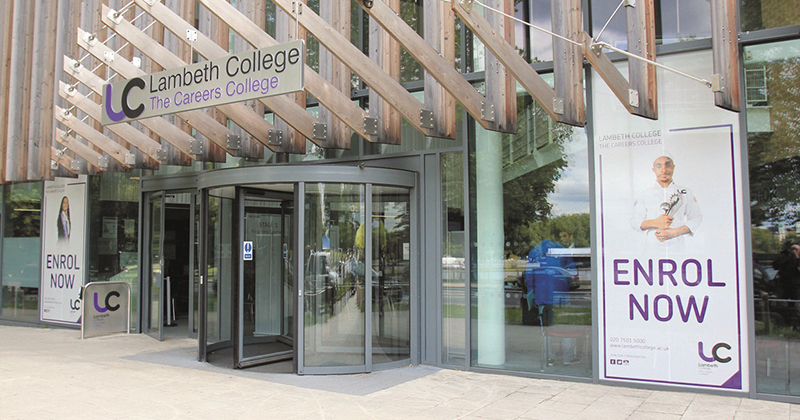 The Department for Education appears to have given a cash-strapped college special treatment, after it endorsed subcontracting to meet short-term funding objectives.

Lambeth College, which is dependent on government bailouts, “embarked on a significant programme of subcontracting” to make up for a recruitment shortfall last year, according to its recently published 2017/18 accounts.

The college itself has insisted that the set-up fitted with its “long-term strategy” and wasn’t the result of “short-term tactics” – a view the DfE has agreed with.

“We work closely with the college, as we do all colleges, to make sure they are working in line with subcontracting rules,” a department spokesperson said.

But evidence from the college’s board minutes and accounts reveal a different story.

Tactical subcontracting is banned under the Education and Skills Funding Agency’s funding rules, which state that providers “must not subcontract to meet short-term funding objectives”.

An observer from the ESFA has been present at all Lambeth College board meetings since 2016, following intervention by the FE commissioner in the September of that year.

It’s currently days away from a merger with London South Bank University which has been in the offing since December 2016.

According to Lambeth’s accounts, the college “failed to recruit sufficient adult students to study on college premises during the course of 2017/18” and “in order to reduce the loss of income” it “embarked on a significant programme of subcontracting”.

“To partially compensate for the number of adult students being taught on campus falling below the budgeted numbers almost £1 million more was spent with the college’s partners to educate adult students off-campus than had been planned,” the accounts said.

The college is “restricted in its use of subcontractors” because of its financial situation, minutes from a November 2017 board meeting state.

The cap means it can’t subcontract more than it did in 2016/17, nor can it  work with new subcontractors.

After having “agreed initial levels of delivery with each contractor”, the minutes showed there was the “possibility for further sub-contracting within the total envelope available” if the college “makes the strategic decision to sub-contract any underdelivery in 2017/18 once the financial impact of enrolment is quantified”.

Minutes from a meeting in March revealed the college to be £1.6 million below its AEB allocation for the year, which was £10,912,170 according to ESFA figures.

The college’s published list of subcontractors showed that 12 providers delivered adult education provision worth almost £3.7 million on the college’s behalf over the year.

On seeing evidence of what appears to be special treatment, Mark Dawe, chief executive of the Association of Employment and Learning Providers, said: “The new ESFA rules are there for good reason.

“If they are abused, everyone will lose out, because the government might ban the practice altogether – including genuine examples of where subcontracting is obviously serving an employer’s interests.”

“The agency must crack down on tactical subcontracting,” he urged.

A spokesperson for Lambeth College said its decision to increase the amount of provision it subcontracted “meant that we maintained the level of subcontracting with the previous year rather than achieving a reduction”.

“This decision was compliant with our long-term strategy, whereby activity levels do not decline prior to merger, and was not the result of shortterm tactics.”

The ESFA’s ban on tactical subcontracting was introduced in 2015.

In a letter to the agency that year the former business secretary Vince Cable warned about “levels of short-term tactical subcontracting that are causing concern” despite efforts by the-then Skills Funding Agency to “enhance the controls on subcontracting in the last two years”.

In December 2016 the college announced it would “join the London South Bank University family in principle”.

The merger had been due to complete by July 2017, but was subsequently put on hold while the college went through an FE commissioner-led structure and prospects appraisal to find an alternative partner.

That process concluded in March 2018 with a recommendation to stick to the original plan, and a new merger date was set for the end of the year.

The merger date was put back again, to January 31. A college spokesperson said this week that the plan “is very much on track, with proposed entry date for joining the LSBU family being only a few days away”.

Meanwhile, the college has been dependent on government bailouts for the past two years.

“The college made a further large loss in 2017/18, it remains dependent on exceptional financial support from the government and its financial position is accurately described as ‘inadequate’”, the accounts said.