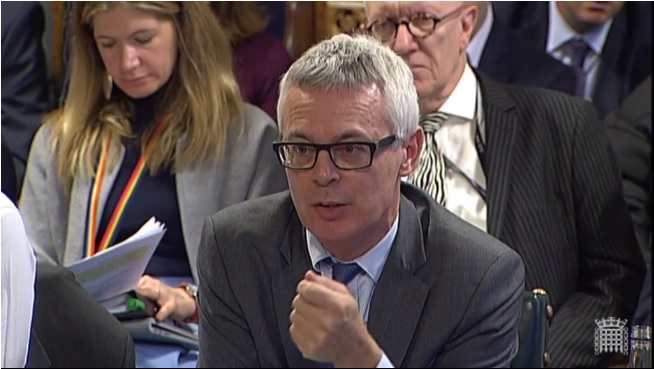 The tight T-levels timetable is “on track” and is “going well”, the Department for Education’s permanent secretary has insisted.

Jonathan Slater was being quizzed by MPs on the education select committee as part of an accountability hearing, alongside education secretary Damian Hinds, this morning.

He was asked if he still had concerns over the timescales for introducing the first of the new technical qualifications in 2020, following his request last May for it to be delayed by a year.

That request was turned down, in the first ever ministerial direction issued by an education secretary.

Mr Slater today denied that he’d said the planned timeframe for T-levels was “too ambitious”.

“I said there would be significant risks with trying to hit a particular timetable because there were a number of things that might go wrong,” he said.

These included the risk that “if you’re running a procurement exercise you don’t know before you start if it’s going to work or if there’s enough bidders”, or if “there’s enough competitive tension” and “challenge”.

“So far it’s going well. The timetable is on track.”

Mr Slater’s comments followed the DfE’s announcement earlier this morning that providers can now bid to deliver T-levels from 2021/22, the second year of their rollout.

Meanwhile, the names of the awarding organisations that will develop the first three T-level pathways are expected to be announced next month.

The controversial £17.5 million tender process, in which AOs bid for an “exclusive license” to develop and deliver the new qualifications, ran from early September to late October last year.

In his letter to Mr Hinds requesting a delay to the timetable, dated May 17, Mr Slater said that “as things stand today, it will clearly be very challenging to ensure that the first three T-levels are ready to be taught from 2020 and beyond to a consistently high standard”.

But in his response the education secretary said that none of the advice he’d received had “indicated that teaching from 2020 cannot be achieved”.

In today’s hearing, Mr Slater said the exchange of letters was part of “a system working well” in which a “civil servant draws the attention of a minister to things that might go wrong and then the minister makes a decision”.

“When the secretary of state has made his decision it’s my job then obviously to work as hard as I possibly can to make sure in the end that he was right and I was wrong.”

Other topics discussed during this morning’s hearing included the projected £500 million overspend on the apprenticeships budget this year.

Mr Hinds stressed that the figures, included in a presentation given by the Institute for Apprenticeships’ chief operating officer late last year, were “not my projection”.

“You can’t project absolutely accurately what’s going to happen a number of years out. This is a demand-led system,” he said.