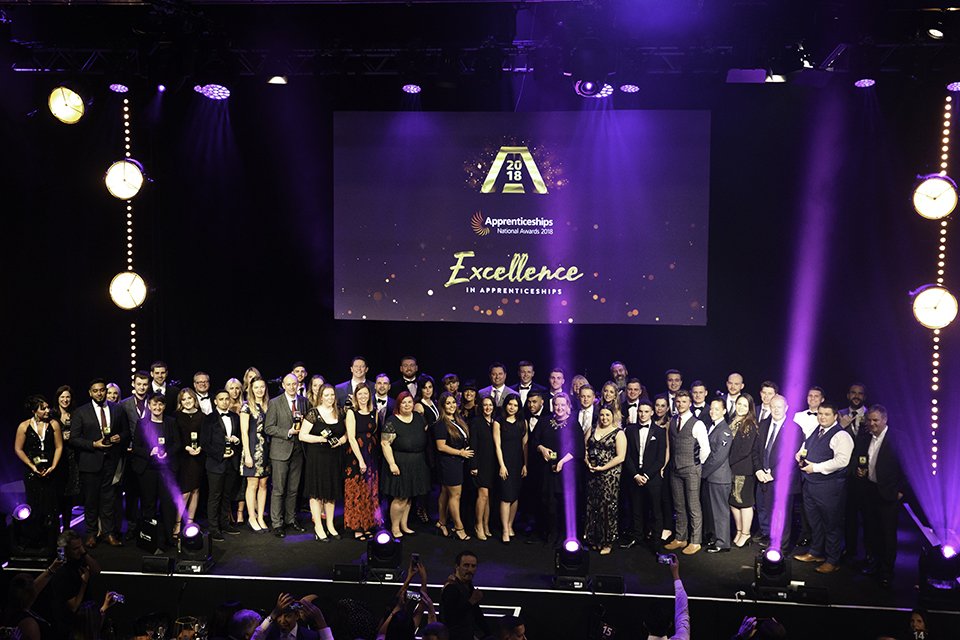 The country’s best individuals and employers who champion apprenticeships have been honoured at the 15th National Apprenticeship Awards – including a new accolade for ‘Rising Stars’.

Old Billingsgate in London held the glitzy ceremony on Wednesday night which was co-hosted by apprentice Lois McClure and TV presenter, George Clarke.

The awards were bigger than ever before, with prizes up for grabs in nine different categories. Entries came from over 1,100 apprentices and employers across England.

To be crowned winners at the national final, apprentices had to battle through tough competition in regional heats and demonstrate how they have benefited from their apprenticeship, before showing their contribution to their employers’ business objectives.

Winning the new rising star award, which showcased trainees who have made “impressive progress in their careers to date and have the potential to go even further”, was intermediate retail and enterprise apprentice Joe Buck.

He is employed by Mitchells and Butlers and currently works in Toby Carvery as its duty manager.

Joe was crowned the winner after his work was recognised as “exceptional by a panel of judges” and through a public vote where over 7,000 people voted for their ‘rising star’.

Joseph Buck from Mitchells & Butlers – winner of the award for the rising star. #AppAward18 pic.twitter.com/IekCsCXRX4

“Joe has gone above and beyond his expected role at Toby Carvery, becoming an expert in both the kitchen and front of house, providing the business strong pipeline for management roles both sides of the pass.”

Natalie White from the National Nuclear Laboratory – winner of the apprenticeship champion of the year. #AppAwards2018 pic.twitter.com/ufu6bOupyY

Muhammad Uddin from Yorkshire Housing – winner of the intermediate apprentice of the year. #AppAwards18 pic.twitter.com/lK0bzkDhi8

Daniel Millington from HydraForce Hydraulics – winner of the advanced apprentice of the year. #AppAwards18 pic.twitter.com/ByAnxul9QB

Jordan Coulton from Weightmans LLP – winner of the higher or degree apprentice of the year. #AppAwards18 pic.twitter.com/bVdkL5b5fG

A special recognition award was also presented for the first time.

It was won by The Armed Forces – The Royal Air Force; Royal Navy and The British Army – for their “commitment to apprenticeships”. All three services are have been recognised as ‘outstanding’ by Ofsted and combined, are the “largest apprenticeship employer in England”.

A ‘Recruitment Excellence Award’ was also introduced this year which recognised employers who have “attracted a diverse and high-quality apprenticeship workforce through new and innovative approaches to recruitment”.

It was picked up by BAE Systems plc, who also took home the macro employer of the year award.

Skills minister Anne Milton, who was in attendance on the night, said: “A huge well done to all the winners, finalists and rising starts.

Apprenticeship and skills minister @AnneMilton has had such an amazing evening at #AppAwards18 she has almost lost her voice! But easily found some words to congratulate all of this year’s winners! pic.twitter.com/U05sucxFNl

“The winners tonight will have stepped out of their comfort zone to learn new skills and many will have changed the direction of their life. Congratulations to them all and they should be very proud of all they have achieved.”

Also in attendance was Keith Smith, the Education and Skills Funding Agency’s director of apprenticeships. He added: “I want to congratulate everyone that was a part of this year’s awards. All of the winners’ stories demonstrate that apprenticeships change lives, lead to rewarding jobs, and transform businesses for the better.”

Host George Clarke said it was “great” to see that the winning employers and apprentices are from “such a rich variety of sectors, showcasing beautifully the broad range of skills that apprenticeships deliver”.

“I am delighted to have been part of this celebration of excellence in apprenticeships,” he concluded.

Education secretary Damian Hinds, who delivered a brief speech on the night, said: “The National Apprenticeship Awards is a fantastic event to celebrate the achievements of apprentices, employers and training providers, and I want to wish all the winners and nominees congratulations on their incredible efforts.”

We caught up with the @educationgovuk Secretary of State @DamianHinds at the National Apprenticeship Awards. #AppAwards18 pic.twitter.com/x9aSSS6XxI