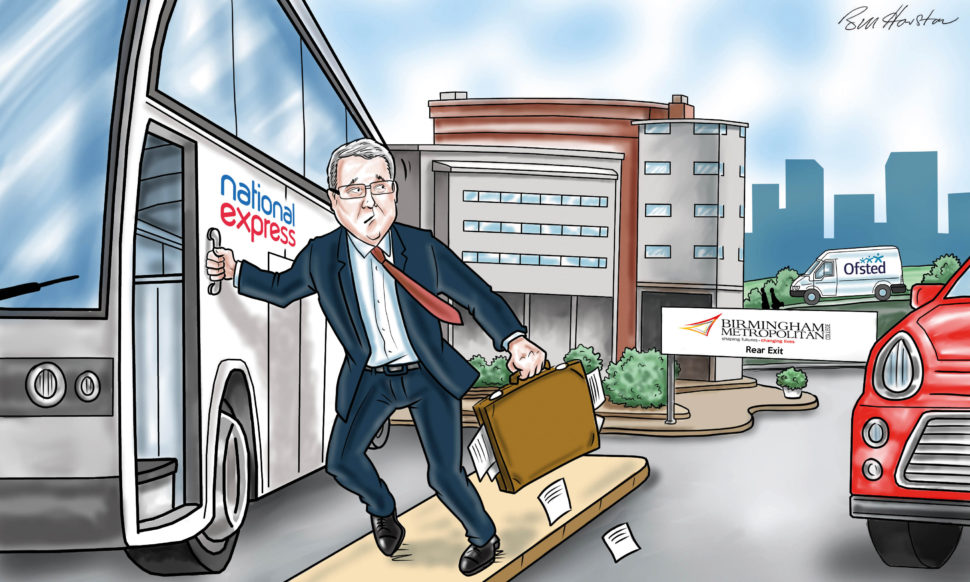 A cash-strapped college whose highly-paid leader was the first in a spate of principals to step down has been rated ‘requires improvement’ for the third time in a row by Ofsted.

Birmingham Metropolitan College received a grade three overall and in five headlines fields in a report published this morning.

However, the inspection was carried out in mid-October – three weeks after Andrew Cleaves resigned with immediate effect.

Inspectors found that “significant weaknesses” remained from the previous inspection, in February 2017, particularly in relation to the “progress that all students studying on level three courses make from their starting points”.

Governors were criticised for failing to “hold leaders to account fully due to the lack of information they receive in relation to students’ progress”.

However, the report noted that the college had “significant financial difficulties” since the last inspection, and had “recently been subject to a series of interventions from the Education and Skills Funding Agency and the FE commissioner”.

Cliff Hall, who was appointed interim principal following Mr Cleaves’ departure, said the report “recognises that significant improvements have been made across the college since the last inspection”, which included “increased achievement rates on the large majority of courses”.

He said the college was pleased to have been rated good in three headline fields: apprenticeships, adult learning, and personal development, behaviour and welfare.

“However, there is further work to be done,” he acknowledged.

“We are already getting on with a clear plan that reflects the high expectations and determination of our staff to achieve the best outcomes for our students.  New measures have recently been in place to continue improving the quality of teaching, learning and assessment at BMet and we are confident they will be successful.”

But according to ESFA accounts for the year, it owed almost £14 million in exceptional financial support – more than any other college.

Despite this, Mr Cleaves, who led the college from 2014 until September this year, was the second most highly paid principal in the country, with a massive £266,000 salary.

Today’s inspection report is the third ‘requires improvement’ report in a row for the college – all three of which were handed down during or shortly after Mr Cleaves’ tenure at the college.

Until recently, these three grade threes in a row would automatically have qualified the college for an ‘inadequate’ grade.

Ofsted’s chief inspector Amanda Spielman told FE Week earlier this week that she had changed this rule when she took over the top job at the inspectorate in January 2017 “because I thought it was flawed in conception”.

“The job of inspection is to report on what we see when we inspect,” she said.

“To artificially say that something is ‘inadequate’ and trigger all the consequences that we know go with grade four judgments, because we want to heap up pressure, I don’t think that’s the right thing for us to do”.

BMet board minutes from earlier this year indicate that the college had self-assessed itself to be ‘good’ in all the main inspection themes except outcomes for learners.

“Although this was still graded as a three there was reasonable in year information to show to inspectors to support a grade two,” minutes from a meeting held in March said.

Mr Cleaves was one of eight high-profile college leaders to have stepped down with immediate effect in recent months.

Their departures are understood to be related to the introduction of the college insolvency regime, which will come into effect at the end of January.