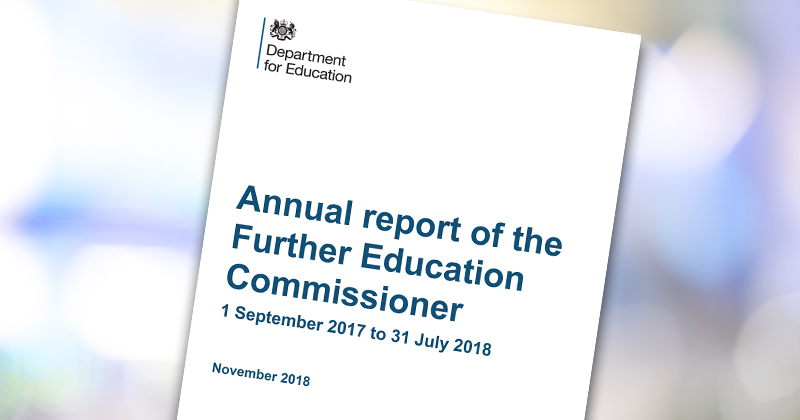 The number of colleges referred for formal intervention by the FE commissioner fell by more than half last year – and none them were the result of an ‘inadequate’ Ofsted grade, according to Richard Atkins’ 2017/18 annual report, published today.

But the number of colleges in financial difficulties referred to Mr Atkins and his team has remained the same as the previous year.

Eight colleges were put into formal intervention – five for financial reasons – while a further three were escalated following a diagnostic assessment by the FE commissioner.

“With eight colleges going into formal intervention, compared to 20 last year, progress is being achieved – fewer colleges are receiving inadequate Ofsted grades, and problems are being tackled earlier, including through structural change,” Mr Atkins said.

But he warned that colleges face “another year of real challenge” – particularly given the impending introduction of the insolvency regime and the end of both exceptional financial support and the restructuring facility.

“There are real risks to colleges and the communities they serve, if a college is failing,” he said.

“Therefore, it has never been more important to plan ahead, and create robust and realistic forecasts of future revenue.”

A total of 17 college mergers had taken place over the year, with the remaining mergers at this stage of the process being “more challenging”.

“It is testament to the hard work and commitment of college leadership teams, my team of deputies and advisers, and the Education and Skills Funding Agency, that these are being achieved”, Mr Atkins said.

Twelve colleges had been through an FE commissioner-led structure and prospects appraisal over the year “which shows that some colleges that were forecasting financial stability have needed to change their view”.

Today’s report, published at the same time as the Department for Education revealed the names of the first six National Leaders of Governance, covers Mr Atkins’ work as FE commissioner from September 2017 to August 2018.

It’s the first FE commissioner annual report since his role was expanded, to focus more on working with colleges before they hit rock bottom.

Mr Atkins’ expanded toolbox included diagnostic assessments, of which the reported revealed he and his team had done 29 over the year – 15 of which resulted in strengthened improvement plans, and three led to the college being put into formal intervention.

“In these cases we have been able to get a head start on recommending action, which was not an option before the creation of the diagnostic assessment process, when it may have taken longer to act and problems may have worsened,” he said.

“Early feedback” on the National Leaders of FE programme and the Strategic College Improvement Fund – another two new FE commissioner initiatives – “indicated that a lot has been achieved”.

“I would like to pay tribute to all the colleges that have contributed to the progress that is being made. Sharing good practice is one of the sector’s most powerful improvement tools,” Mr Atkins said.

FE Week analysis of Ofsted reports revealed that three quarters of colleges are rated ‘good’ or ‘outstanding’ – while none are rated ‘inadequate’.