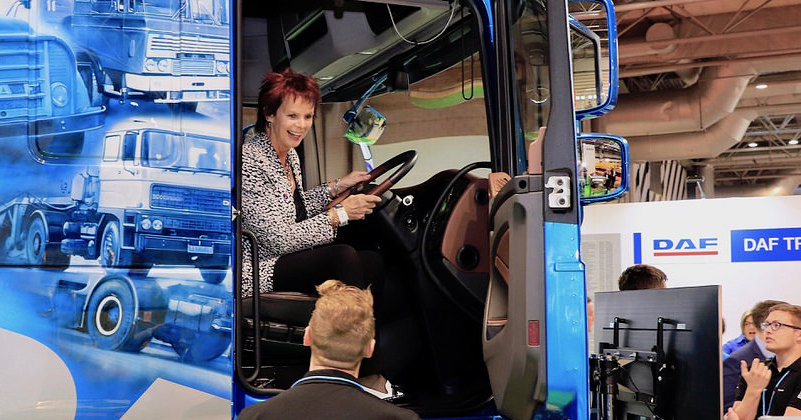 The skills minister declared herself to be having an “absolutely fantastic time” as she got stuck into the heart of the action on the first day of the “bigger and better” WorldSkills UK Live this morning.

Anne Milton met with apprentices and had-a-go at a number of trades – including virtual engineering and floristry – as she toured the show, which runs for three days at the National Exhibition Centre in Birmingham.

The show has a number of benefits, including the opportunity to have a go at different occupations, Ms Milton said.

“There’s nothing quite like having some hands-on experience,” she said.

“What’s also important is that you don’t realise when you’re in school the huge range of possible occupations out there.”

“There are record numbers of young people coming through here, and half of them are girls and young women, which is fantastic. We’re seeing some real gender diversity.”

Among the stops on Ms Milton’s tour were BAE Systems, Bosch, the National Careers Service and the Apprenticeships Service.

As well as trying out virtual engineering, having a selfie taken by a robot and climbing up into the cab of a lorry she spoke to a wide range of apprentices “who’ve just got such good stories to tell”.

Young people are competing in over 70 different skills over two days, with the victors earning places in the Team UK squad for WorldSkills Kazan in 2019.

Ms Milton wished all the competitors “so much luck”, and said she had her “fingers crossed for all of them”.

“If you’ve not witnessed it you can have no idea what these young people have to go through,” she said.

“This is two days of really intensive competition. It’s the skills Olympics, but unlike most Olympics events which last minutes or seconds these kids are at this for two days.”

Launched in 2012, following the UK’s hosting of the international WorldSkills competition, WorldSkills UK Live – formerly known as the Skills Show until it rebranded earlier this year –  has grown into the nation’s largest skills, apprenticeships and careers event.

This is set to be the biggest show ever, with 80,000 visitors expected over the three days, from November 15 to 17.

Spotlight stages will feature a wide range of speakers through the three days, giving an insight into different careers including science, the automotive industry, health care, architecture, visual effects – even professional football.

And visitors will be able to take part in many hands-on activities, including autobody repair, carpentry, and landing a virtual plane.