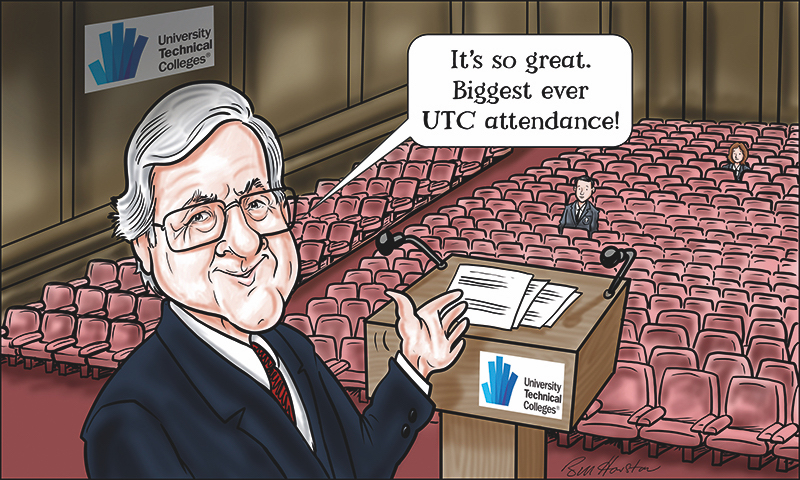 The organisation behind the university technical college programme has claimed the number of 14-year-olds studying at the institutions is on the up – even though its own figures show the opposite.

A spokesperson for the Baker Dearing Trust told FE Week that year 10 recruitment at the 14-to-19 technical institutions “has grown 40 per cent over the past two years” which “suggests students are interested in this form of education at a younger age”.

“This doesn’t suggest that the programme is struggling. Quite the opposite,” she said.

But when pressed by FE Week, she admitted that this was the overall number of learners – which is likely to have gone up as more UTCs have opened – rather than a per-UTC increase.

Further analysis revealed that the average intake of 14-year-old learners per UTC has actually fallen this year.

According to the trust’s unpublished enrolment figures for 2018/19, each institution has an average of 82 year 10 learners.

That’s down from 85 per UTC in 2017/18, according to school-census data published by the Department for Education.

The spokesperson was responding to FE Week’s request for a comment on our analysis of learner numbers at established UTCs.

That found that 19 of them saw a year-on-year drop, with two-thirds of the 33 still operating at less than half of capacity.

Both UTC Plymouth and Sir Charles Kao UT, now rebranded as the BMAT STEM Academy, had a more than 50 per cent drop in learner numbers.

Helena Mills, chief executive of the Burnt Mill Academy Trust, which the UTC joined earlier this year, said the low numbers were due to a decision by the trust and the DfE to halt recruitment of year 10 and year 12 learners last year “because the future of Sir Charles Kao UTC was uncertain”.

As the BMAT STEM Academy, the school limited recruitment to year 10 in 2018/19 and has reached its target of 50 learners – and it expects to attract a further 100 in 2019/20, with a “lot of interest from prospective parents”.

A spokesperson for the school attributed this fall to the school’s decision to not take on any 14-year-olds last year.

She said 2017/18 was a “year of transition for us”, following an ‘inadequate’ Ofsted grade in 2016, but that since joining Reach South multi-academy trust at the start of 2018/19 the school had “already seen a marked increase of interest”.

Liam McDaid, the school’s principal, said this fall came “directly following an Ofsted inspection in February 2017”, which resulted in a grade four overall.

He said the institution was working with the DfE, Ofsted and other local schools to “organically improve UTC Bolton and increase the recruitment of students”.

However, Steve Leahey, its principal, said this boost was “mainly down to our new UTC feeder school” for 11- to 14-year-olds, which opened in September 2017 and filled all its 120 places.

Alongside this there was a “small increase in UTC numbers at 14 and post-16,” he said.