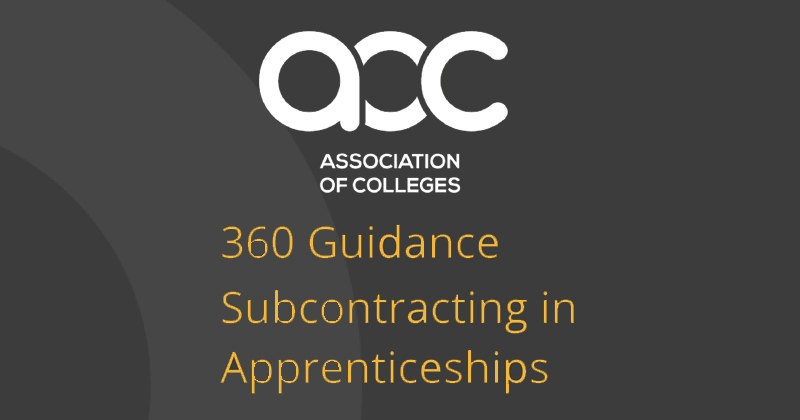 Prime providers should demand a higher top-slice from “risky” subcontractors to reflect the extra work that comes with them, according to new subcontracting guidance from a leading FE body.

The Association of Colleges’ guidance, published on October 22, tells main providers that “risk is a key assessment factor when determining fees and charges” and should be assessed “in addition to all due diligence checks”.

Other FE representative bodies have warned that providers should not be working with any subcontractor deemed to be a risk, but the AoC’s head of policy, Teresa Frith, has insisted the policy is sensible for providers who are having to spend more time and money with subcontractors with whom they have less of a relationship.

She told FE Week: “The amount of money you charge should reflect the level of risk, which should in turn reflect the amount of provision and support you provide to that subcontractor.

“In the whole of the apprenticeship world now, it is not in any way one-size-fits-all. It’s supposed to fit the circumstance you find yourself working with.

“If I don’t know you the risk of working with you is much higher for me. Because I am the main provider, I’m the one exposed. It’s my responsibility to spend the money wisely.”

She added: “It’s certainly not saying ‘just charge more because you can because they’re higher risk’. The service you provide has to reflect the risk.”

The guidance document said risks could include the duration or value of the contract, its geographical spread, previous track record and the qualifications and turnover of a subcontractor’s staff, and main providers need “a method of scoring risks in order to determine how the level of risk exposure is reflected within the fees and charges offered for each subcontract”.

In March, the Association of Employment and Learning Providers, Collab Group and HOLEX put their names to best-practice guidance on subcontractors, which included a stipulation that management fees charged by main providers should not be more than 20 per cent of the programme funding.

FE Week has discovered many examples of colleges charging much bigger top-slices in recent years. Stephenson College, for example, charges up to 57 per cent management fees, and John Ruskin College charged 39 per cent on average in 2016/17. Five other colleges charged top-slices of over 30 per cent in 2016/17.

AoC’s individual guidance states that if the lead provider is not directly delivering anything related to the subcontractor’s provision then “it would be highly unusual for any fee to exceed 20 per cent and generally it would be expected to be less”.

Mark Dawe, chief executive of AELP, said the association was “encouraged” by the AoC’s agreement on the 20 per cent figure, but added: “Our view is that anything above this would suggest a level of risk that the lead provider simply shouldn’t be taking on.”

Sue Pember, director of policy at HOLEX, said it was “reassuring” there was “consensus over the benefits of quality subcontracting”.

“If more than 20 per cent is kept back over management costs, there is a concern that the learner experience will be compromised and a question over why use that subcontractor if they need intensive costly support,” she added.

The guidance document was written with input from bodies including the Education and Skills Funding Agency and Ofsted, but neither would be drawn on whether they support the recommendations.

A spokesperson for the ESFA pointed FE Week to its existing guidance on subcontracting, including plans to publish its “final expectations” by the end of the year, but would not comment whether it supported the AoC’s approach to risky subcontractors.

An Ofsted spokesperson said the inspectorate had provided input on how it inspects subcontracted provision, but it was not in its remit to “advise or comment about the financial contracts” between providers and subcontractors.