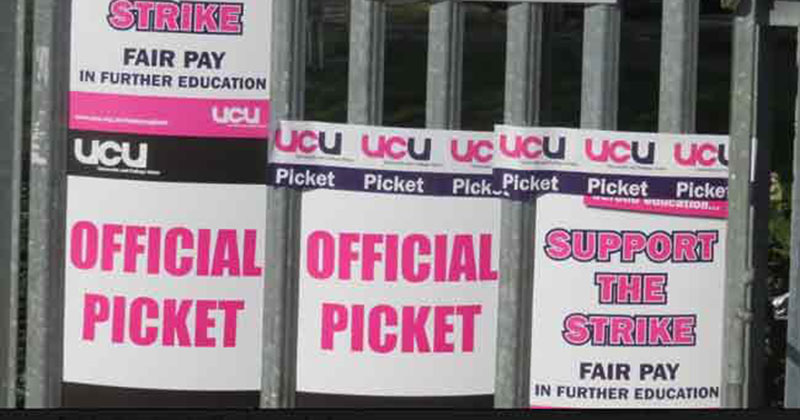 Staff are likely to strike at four colleges this term, but union members are in uproar as ballots at 103 others did not pass new “pernicious” thresholds.

The University and Colleges union has been balloting staff in colleges across the country since August on whether they want to take industrial action in a battle over pay.

Results were released today and show that 85 per cent of members in the 107 colleges that voted said they would strike.

However, “restrictive” trade union laws mean that, except in Northern Ireland, only those institutions with a 50 per cent turnout can act on the results.

A full breakdown of results by institution can be found here.

The union said members of FE committees would be meeting in the coming days to consider the results and next steps.

The UCU said today that it was “frustrated” with the law, and pointed out that college staff have seen their pay “decline by 25 per cent over the last decade”.

Meanwhile, the employers’ representatives, the Association of Colleges, “have yet to make a concrete offer to staff but have said they are seeking extra government funding to support a pay rise”.

“However, pernicious ballot restrictions which single out trade unions for special treatment mean this can only be taken forward in some institutions. UCU members will be meeting in the coming days to discuss the outcome of the ballot and the next steps in our campaign for a better deal for staff.”

College staff were left bitterly disappointed in July when the AoC said it was unable to recommend a salary increase of five per cent, and was instead only able to propose a “substantial pay package” over two years dependent on government funding.

The UCU described the proposal as “bizarre” at the time and warned that an immediate solution was needed if colleges wanted to avoid strikes in the autumn.

No such action has since been forthcoming and the government has outright refused to provide the funds needed to increase staff pay – even though it was able to increase school teacher pay by 3.5 per cent.

The AoC’s chief executive, David Hughes, was furious about this and launched a new louder strategy by holding a “week of action” where students, staff, parents, employers, and stakeholders were asked to “advocate for colleges”, including a march on parliament to demand more funding.