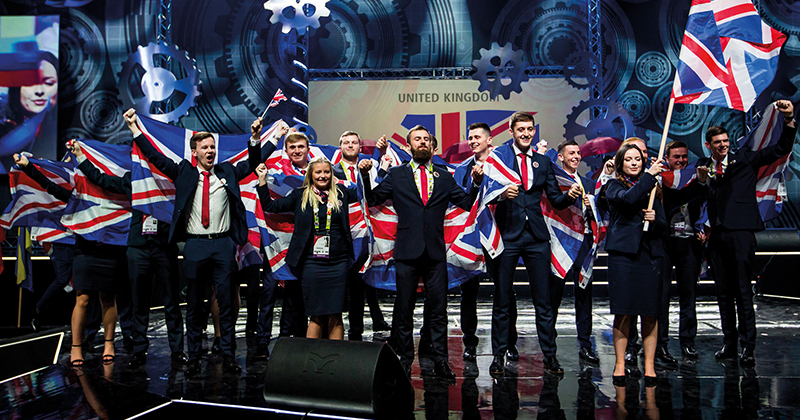 Almost seven years ago the world descended upon London’s Excel arena for the 41st WorldSkills competition – my first experience. At the time it was hailed as the largest ever skills competition, and the first single event to fully occupy the Excel centre. Transport for London even used the event as a drill for the upcoming Olympic Games.

In the months following the event we worked with the National Apprenticeship Service, which was then operating skills competitions in the UK, to improve the profile of WorldSkills in the UK.

As a sector we often reflect on the lack of media attention FE receives. The work of WorldSkills UK and the successes of Team UK is something we should be extremely proud of, not just as a sector, but as a nation.

We took the decision to accept an offer of becoming media partner later that year – a role which would embed us with Team UK and follow their journeys as they prepared to compete on the international stage.

At the time I was wee lad and about the same age as the competitors, in fact some were older. For two years I worked alongside Team UK and observed our world class education system in operation as the team got set to compete at WorldSkills Leipzig.

As my hairline has receded, other members of the FE Week team have had the opportunity to report and be inspired. My whole organisation is fully committed to investing in WorldSkills UK to ensure an increasing number of people are able to learn about their work and successes. We have now renewed our media partnership with WorldSkills UK for a further two years.

In recent years the national media has finally shown more of an interest in WorldSkills, from the BBC to daily newspapers. It’s great to see, and provides a great representation to the public of what our sector achieves.

Team UK’s successes are only possible thanks to the infrastructure provided by colleges, providers and employers across the country.

What the FE sector now needs to do is shout about it more. More than ever before. Get on social media over the coming few days and wish the team good luck, using the hashtag #TEAMUK. Share the news articles on our website with your colleagues and stake-holders.

It’s great to see more of the sector engaging with WorldSkills UK than ever before, but it’s not nearly enough! There is so much more we could do.

WorldSkills UK and Team UK are some of the best ambassadors for the FE sector we have. They and the sector deserve to be celebrated and recognised!

Keeping with the theme of championing the sector, we have also this week thrown our weight behind the “Colleges Week” campaign, led by AoC. You might have noticed we’ve added the campaign logo to our masthead, both on our website and this newspaper.

The week provides a focused opportunity to showcase and celebrate the inspiring work colleges provide their local communities and beyond, alongside this highlighting the government’s underinvestment in colleges.

We at FE Week fully support the mission of Colleges Week and hope it is a great success, with impact.

We would encourage all in the sector to support the campaign and hope that it has a positive impact for all providers. On the eve of the Chancellor’s autumn statement, we need a united voice arguing for an increase in the rates paid to ensure the entire sector can continue to provide a world class education for learners.

Next week we will undoubtedly be showered with platitudes from Damian Hinds, when he speaks at his party conference, about the great work the sector does and its importance. Don’t let him and the Chancellor get away with their being no substance. This is a long overdue opportunity for them to put their money where their mouth is and cough-up.

But they will need a nudge.