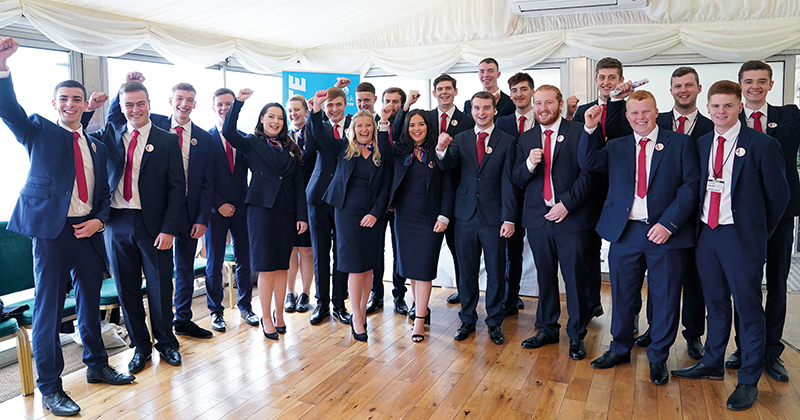 Twenty two of the UK’s most highly skilled young people will fly to Budapest next week to compete in EuroSkills 2018.

The team will go up against the best Europe has to offer from 27 countries in disciplines ranging from mechatronics to cooking, heavy truck maintenance to floristry.

Each member of Team UK has swapped their evenings, weekends, and social life for dogged training regimes over the past year, ever since they won places at the UK’s Skills Show, now known as WorldSkills UK Live, last year.

Now the training is over, the team is raring to compete in what will be the first international competition for most of them.

Everyone in the team has been hard at it, working on weekends and in holiday periods

“Prep has gone really well,” said WorldSkills UK chief executive Dr Neil Bentley. “Everyone in the team has been hard at it, working on weekends and in holiday periods.

“What’s been really good is the sense of togetherness that you see at the boot camps and the camaraderie that they’ve got.”

He said the target was to finish in the top 10.

EuroSkills is the sister competition to WorldSkills, often referred to as the “Olympics of skills”, and takes place every two years.

On offer to competitors are gold, silver and bronze medals as well as medallions of excellence, achieved whenever a team member reaches the international standard in their discipline.

At the last EuroSkills in Gothenburg in 2016, Team UK won two gold medals, one silver, two bronzes and eight medallions of excellence.

Among the competitors this year is Shane Carpenter, who is employed by BAE Systems and will compete in IT network administration.

The 22-year-old is no stranger to the process and competed in WorldSkills Abu Dhabi last year where he achieved a medallion of excellence.

“I would like this time to get top three because I missed out slightly in Abu Dhabi after a few mistakes and that is what I’ve learnt from. I’m pretty confident,” he told FE Week.

Skills minister Anne Milton sang the praises of Team UK at a special send-off event in Parliament earlier this month.

She told them life today is “no longer about what you know, it is about what skills you have got as well”.

“You will be going out to Budapest representing your country and doing us proud.”

Speaking to FE Week after the event she added: “It is going to take endurance, fortitude and determination to show the rest of Europe what they can do. Good luck to them all.”

Team UK flies to Hungary on September 24, and will take part in three days of intense competition between September 26 and 28.

FE Week is media partner and will be reporting every step of the way.