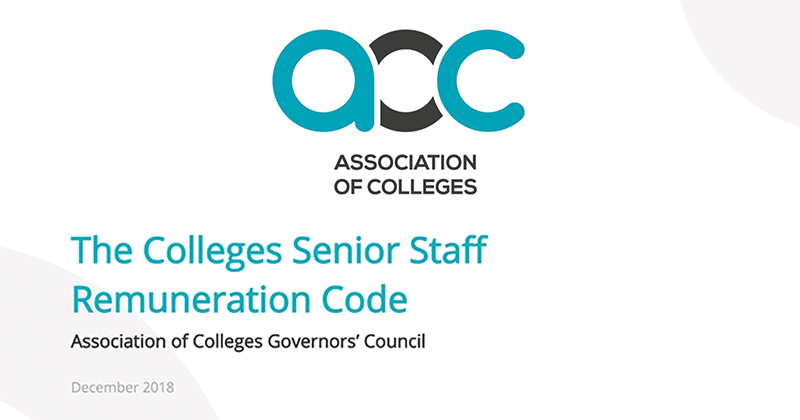 Principals have welcomed new guidance from the Association of Colleges for setting senior pay in colleges, but unions have warned the voluntary code will not be enough to tackle excessive rewards.

FE Week revealed last week that refreshed remuneration guidance was being developed by the association as top level pay across the education sector continues to come under heavy scrutiny.

The government has clamped down on chief executive salaries in multi-academy trusts and vice-chancellor wages in universities which often exceed £150,000, but left colleges untouched despite many bosses receiving more than £200,000.

A consultation for the AoC’s new code, which encompasses “three core principles: fairness, independence and transparency” and is an amendment to existing guidance created in 2015, was launched to tackle this.

The main proposals include only giving seniors a pay rise if all staff also receive one, removing top college bosses from remuneration committees, separate publication of principal salaries and a requirement to justify any income seniors receive from outside organisations.

Ian Pryce, principal of Bedford College, told FE Week the AoC should be “applauded for being ahead of the curve”.

“We don’t have an issue with senior pay in colleges,” he claimed. “Governors behave very responsibility. The code sets out good practice that I’m sure is already largely followed.”

“NCG welcomes the senior pay code for colleges,” a spokesperson said. “As a leading further education group invested in its staff we already operate by these principles.”

But unions expressed concern that the code is not statutory.

“Whilst UNISON welcomes the AoC’s admission that more checks and balances are needed in relation to senior staff pay in colleges, a voluntary code will not be enough to tackle excessive pay awards,” said Leigh Powell, the union’s FE lead officer.

“This code has been in existence for three years and yet we continue to see principals being awarded pay rises other staff in colleges can only dream about.

“It is difficult to see exactly how adding a few words to a document that has been proven to have little effect to date is going to lead to the necessary changes in practice.”

We hope that the final version will have real teeth

“Whilst we agree that principals shouldn’t be on remunerations committees, we have concerns that the proposed code is only voluntary,” he said.

“We hope that the final version will have real teeth and not allow colleges to get out of proper transparency when it comes to leaders’ pay, especially at a time when staff have suffered pay cuts of 25 per cent over the last decade.”

Mr Pryce pointed out that colleges are independent charities so the code “should be guidance”.

He added: “Senior pay is a low multiple of median salaries. The multiples are higher in the civil service and NHS because median pay is lower, so the code might lead to or justify higher CEO pay.

“Colleges might also concentrate good rises on those staff around the median, rather than the low paid.”

The refreshed senior pay code has been developed at a frustrating time for college staff, after the DfE decided to fund a 3.5 per cent pay rise for school teachers while ignoring FE lecturers. UCU has since launched a ballot for strike action to take place later this year.

“This shouldn’t really need saying but the increasing differentials between senior level pay and that of lecturers and other FE staff is simply inexcusable,” said Kevin Courtney, joint general secretary of the National Education Union.

“The NEU firmly supports the effort by AoC to encourage colleges to sign up to and honour a code of conduct that could potentially bring greater fairness into pay settlements.”