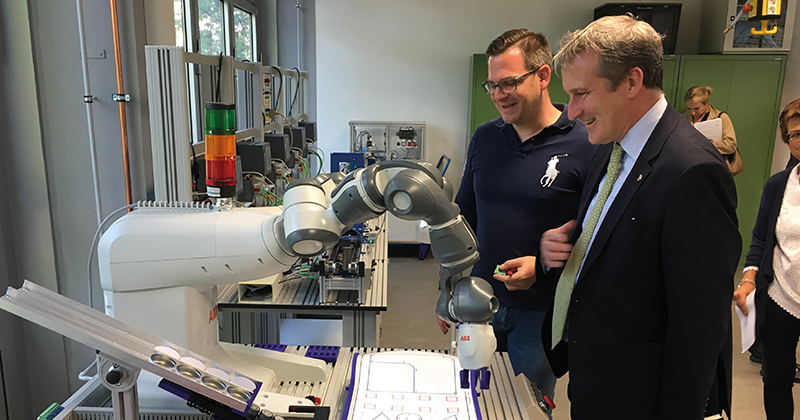 Education secretary Damian Hinds this week followed in the footsteps of many a government minister before him and jetted off for a fact-finding mission to our neighbours on the continent.

His visit to Germany and the Netherlands was intended to “discover how they educate their young people to have the practical and technical skills needed for a highly productive economy”, according to an article in the Times newspaper on Monday.

A similar trip by former skills minister Nick Boles to Norway in August 2015 (pictured) came just months before the launch of the Sainsbury review, which resulted in proposals to develop T-level qualifications.

Those plans bear a certain resemblance to Norway’s post-16 education system, so what new developments can we expect to see as a result of Mr Hinds’ visit this week?

Speaking to FE Week from Dresden Airport on the third day of his trip, where he was about to catch a plane to Amsterdam, the education secretary was either unwilling or unable to say.

“I’ve been here 72 hours and I’m going to assimilate what I’ve heard here with other points of learning,” he said.

Professor Ewart Keep explains what we can learn from Germany

However, he indicated this was unlikely to be involve importing systems wholesale or cherry-picking individual elements.

“They rely on years, decades, sometimes even centuries of development.”

At the same time: “I don’t think you can take individual little elements and say I have learned that one thing, and copy that across,” he said.

Mr Hinds’ research mission came at a critical time for the reform programme in this country’s technical education system – 16 months after the introduction of the apprenticeship levy and the associated changes to the system, and 24 months before the first T-level courses will be taught.

It was “right as we go on our ambitious reform programme we also seek to learn from systems like Germany and others”, he said.

Germany, where Hinds spent the first three days of his trip, is “world famous” for its technical education system and “has a very high reputation,” he said.

The policy, established for nearly 50 years, is known as the ‘dual system’ in reference to the two training locations – vocational school and the workplace.

An apprenticeship in this ‘dual system’ is considered to be the main route into employment for young Germans. It is well-recognised and highly valued by employers, and by the young people themselves.

The “parity of esteem” between technical and academic education, which the government is aiming to achieve through its reforms, “comes across very clearly here,” he said.

“The technical system, the apprenticeships, the professions that people are learning in, that’s a very well-established system which has great respect across society and is very well-entrenched,” Mr Hinds said.

He spoke about the central role that employers had in making the ‘dual system’ work.

Businesses in Germany had a “deep commitment” to “every side and at every level to apprenticeships”, he said.

This was driven “partly from their own interest to bring on talent, and to identify who’s going to bring them further on and help them grow”.

But it was also because “it’s part of what people do, what businesses do in society”, he said.

The Netherlands, where Mr Hinds was due to spend the rest of his fact-finding trip, is “another system that is useful to look at”, he said.

One of the key features of its education system, which is perhaps less well-known than that of its neighbour, is that children can choose a vocational route from the age of 12.

Employer involvement in the Dutch system is less well-established than in Germany, and only became formalised in 1996.

The system is “in terms of industrial structures, in some ways more similar to our own,” Mr Hinds said.

Germany’s long-established system of technical education is the envy of many countries, linked as it is with high productivity and low unemployment.

Just over half of young people in Germany go through the ‘dual system’ – a proportion that has fallen in recent years.

For the majority this is likely to be an apprenticeship lasting two or three years, beginning at the age of 16. A transition year is an option for those who can’t find a company to train with or need further education or training before they can start an apprenticeship.

Apprentices spend one or two days a week or several weeks at once in vocational school, called Berufsschule, with the remainder of their time spent learning on the job.

The German apprenticeship system is strictly regulated and any company taking on an apprentice must ensure they are trained up to specific standards – and there are around 350 of them.

These are set by the relevant Chambers of Commerce, which play a central role in the ‘dual system’ – in effect managing the system on behalf of the national government.

All German companies must belong to a Chamber of Commerce, and must pay a levy that goes towards the cost of running the training system.

Costs for the vocational school element of apprenticeship training are paid for by the state, while the employer pays for on-the-job training.

Around 20 per cent of German companies are involved in the apprenticeship system, according to the Bundesinstitut für Berufsbildung.

Education in the Netherlands

Vocational education can begin as early as 12 in the Netherlands.

Dutch children are split into three different types of secondary school, with only one of them giving direct access to an academic university.

The other two types are more vocationally focused. Of these the ‘pre-vocational education’ route, called VMBO, is the most popular and chosen by more than half of Dutch children.

It involves a mix of vocational training and general education, and runs from the age of 12 to 16.

After the VMBO young people can then move onto the MBO, or middle-level applied education. This can last between one and four years, and can be either classroom-based or an apprenticeship – although both options include some time spent learning on the job.

Graduates of the four-year middle-level training can progress onto higher professional education in the equivalent of what had once been polytechnics in this country.

Employer involvement in the Dutch vocational system is much less well-developed than in Germany, and was only formalised in the 1990s.

The 1996 Educational and Vocational Training Act gave businesses more influence on the content of vocational and skills programmes.