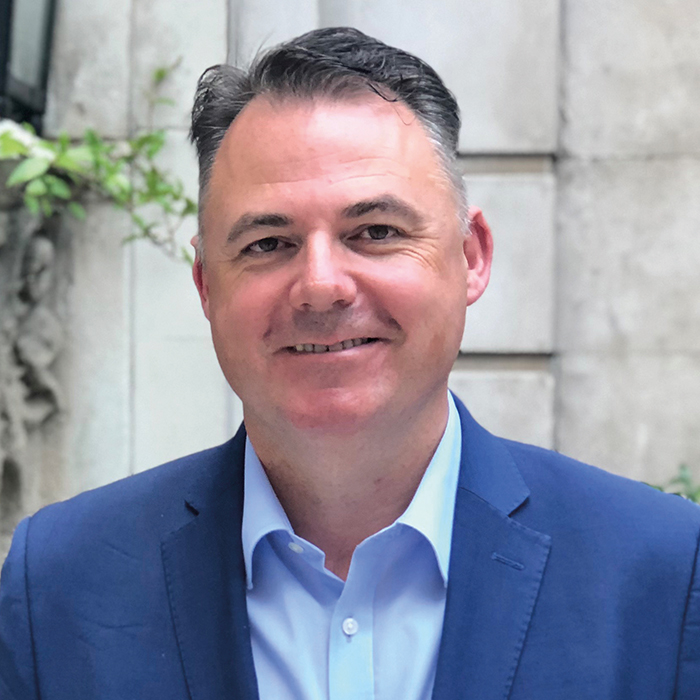 “Getting into further education really transformed my life”

Tom Bewick recently took over the top job at the membership organisation Federation of Awarding Bodies. FE Week caught up with him just a couple of months into the job, to find out what led him to where he is today

“You’re not going to write one of those profiles where you dissect my food choices, are you?” asks Tom Bewick, scanning the menu nervously.

Having had nothing but breezily confident emails from the new chief executive of the Federation of Awarding Bodies, his apprehensiveness takes me by surprise.

It’s been a big couple of months for Bewick. In fact, everything is coming to a head on the day we meet, with the federation threatening to take the government to court over their decision to allow only one awarding body for each T-level pathway.

“I’d barely finished my induction when we were thrown into this,” he admits, with a candour that suggests he’s not one to blag.

It’s not the first time Bewick has wrangled with government ministers. In 2005, together with Tony Hall, now director-general of the BBC, then chief executive of the Royal Opera House, he persuaded the government to fund the country’s first creative and cultural apprenticeships, apparently by “banging down the door” of then minister for vocational education Phil Hope. “It was quite a battle, because the Learning and Skills Council said they would only fund existing apprenticeships. It’s not like these days with the Institute for Apprenticeships. There was no process.”

The apprenticeships were part of Bewick’s masterplan as founding chief executive of the Creative and Cultural Skills council, to end the “grossly unfair” practice of unpaid internships in the creative industries. “It was out of control. It was almost being used – sometimes by quite prestigious public and private arts organisations – as a way of satisfying their recruitment needs.”

This was towards the end of the Blairite years. A decade earlier, Bewick had been on the inside, slogging away for the party he joined as a teenager.

“I was drafted into Tony Blair’s Labour Party dream in 1997,” he says. In other words, he landed a job as national policy officer for education and employment, working in Milbank Towers under Matthew Taylor – then Labour’s director of policy, now chief executive of the RSA. “It was the classic ‘boy from Nuneaton, been a member of the party, done a bit of student politics, socks it to them as to why he thinks he’s the best person for the job in education and employment policy’”, he jokes of his interview technique, self-effacingly.

This was only Bewick’s second job after a couple of years in a building just across the river, as European policy officer for the Training and Enterprise Council.

From the age of 17, the Labour Party functioned as a “surrogate family” to Bewick, who grew up in care. “It was like the family I never had,” he explains. “It was a great place to go for further education in a way – people who were passionate about politics. But also for mentors – people who you looked up to in the community, who could give you a bit of a steer and a helping hand.”

He remains loyal to Labour to this day as a councillor for Brighton and Hove, despite reservations about current in-fighting. “It’s almost like your solemn vows, you make a lifelong commitment to a political party – it’s very hard to leave, even if things change around you”.

Bewick’s early childhood was marked by the sudden death of his mother, followed by multiple foster placements. “Dad was what we’d call him an addicted gambler now, but basically, there wasn’t any money in the house to pay for anything, so it was only a matter of time before I became the subject of a care order,” he confides. He was seven years old.

“I obviously didn’t react to school as a system very well, as I was in care,” he adds, with heart-breaking fatalism. Indeed, school left him woefully unprepared for a world in which the care system used to spit children out at 16 and expect them to make a life for themselves.

“David Cameron went to Eton, I went to Etone comprehensive in Nuneaton and I left with just one O-level in English,” he quips. “So at least I learned to read and write.”

Luckily for Bewick, his foster parents allowed him to live with them for an additional two years. By day, he applied himself to the arts of shelf-stacking and trolley-gathering at a Kwik Save supermarket. By night, he slogged through four GCSEs and two A-levels at what was then North Warwickshire College.

“Getting into further education – a different approach to learning, really transformed my life,” he says. “That’s why I’m so passionate about it.”

Despite his dedication to the Labour Party, five years “being at the end of a pager 24 hours a day” burned him out. “You’re not just working for an employer – this is a mission – this is an all-consuming thing in your life and it feels like that from the day you’re in it”.

I obviously didn’t react to school as a system very well, as I was in care

Drained, he “decided to up-sticks, bugger off” and spend all £30k of his hard-earned savings “chasing the sun”. Bewick’s usually careful language deteriorates at this point, as if to better illustrate the degenerate character of what he calls his “early mid-life crisis”. He went to stay with a friend in Cape Town, “did tennis lessons, bought a classic 1970-something Vespa and pissed around on that for six months and watched the bank balance drop”. A further six months in Ibiza just about did it for him – “you’ll appreciate,” he confides candidly, “I don’t have a lot of memories of that period” – and he duly returned to East London in late 2003, making it back with barely enough funds to turn up looking respectable for his new job as a director for Thames Gateway at the Learning and Skills Council. “With hindsight, running on empty like that was taking it a little bit too far,” he says, all too aware of the fact that he, like many care leavers now helped by the charity of which he is a trustee, had no family support to fall back on. “You can be £200 away from disaster.”

This was Bewick’s third year abroad – the other two had been more obviously purposeful. He’d spent a year in Ljubljana, Slovenia, on an Erasmus exchange in the early nineties, post-Balkan conflict – somewhat against his will, as Bath University’s sole condition of offering him a fully-funded masters in European public policy analysis.

He remembers arriving fresh from the Aeroflot jet in early January, climbing to the 14th floor of a grey, dank, concrete tower block “that wouldn’t have looked out of place in Warsaw, Poland or Walsall in the West Midlands” and bursting into tears.

But living in care had made him resilient. “It wasn’t that unusual to rock up somewhere completely strange where you don’t know anybody, you’ve got a few pennies to your name and few worldly possessions.” By the end of the year, he knew basic Slovenian – or at least “the words for beer and pizza, you know, all the key social ones” – and had made one of his best friends to this day, who now works for the OECD in Paris, and to whose children Bewick is godfather.

His first year abroad was several years earlier, at the flighty age of 18, when he checked out of his foster home, packed up all his worldly possessions in a backpack, and jetted off to Canada on “the equivalent of Charlie and the Chocolate Factory’s golden ticket” – and almost never came back.

It was a fully-funded programme he’d found through his local library – for volunteers from backgrounds like his own, to go and work with disadvantaged teenagers from indigenous communities in Canada. He learned to drive, play baseball and teach functional skills. “It was the making of me,” he says. “It made me realise that my vocation in life was going to be working to advocate on behalf of communities, that I had this skill to get on with people from all different backgrounds at all levels of seniority. That was something that people around me told me: ‘You’ve got a natural talent for that’.”

The charity, Frontiers Foundation, helped him secure a scholarship to the prestigious McGill University in Montreal, but the pull of “home” was too great and he threw his lot in with the great British clearing system, coming out with a place at Brighton Polytechnic to study social policy and administration. After a year, he wangled a transfer to Bath University (for a girlfriend, not the prestige) where he became Labour club president and editor of the student magazine.

The way he speaks about his first job at the Training and Enterprise Council is indicative of an attitude of general gratitude that he seems to apply to other areas of his life: “I remember reading the job advert and feeling ‘somebody up there is really looking out for me’ as it was like they’d written the job for me,” he says.

Bewick feels incredibly lucky to have the job, life and family he has now – his wife and three children live with him in Brighton: “Frankly, I wake up now every working day and just feel brilliant to be alive.”

Jun 2001 – Nov 2002
Adviser to the Minister for Adult Skills, Department for Education and Skills