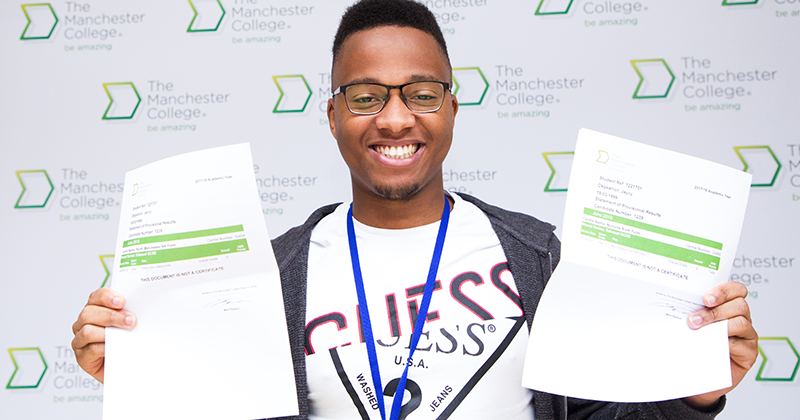 A 19-year-old learner at The Manchester College is full of excitement for the future, having finally passed his English and maths GCSEs after five attempts.

Jaycy Okpeahior [pictured above] spoke to FE Week of his determination to make the grade in these core subjects – without which he would not be able to progress to university.

“It feels so good to finally pass! It’s such a satisfying feeling and it means I never have to take a maths exam ever again,” he said.

“I was determined to get my pass and to get them out of the way. The University of Salford, and in fact every university course I looked at, insisted that I have those passes to be accepted onto the course, so my career was dependant on these results.”

Jaycy, who moved to Manchester from Spain at the age of 15, sat the exams for the first time at secondary school but failed both.

He then went on to resit both four times while studying a level three diploma in business venture with entrepreneurship and marketing at The Manchester College – missing out by a single point on one attempt.

Jaycy finally achieved his goal this morning, with a grade four in maths and a grade five in English.

“I’m so excited about the future now,” he said.

Another learner at The Manchester College is also celebrating success in her maths GCSE resit today, having achieved a grade four.

Siena Gooderham, 17, was caught up in the tragic attack at the Manchester Arena in May last year, which happened the night before she sat her maths exam for the first time.

She ended up getting a grade three, missing out on the all-important grade four by just a few points.

“I’d suffered from anxiety before, but after the arena attack it got much worse,” she said.

She attributed her success second time around to the support she received from her college maths tutor Jaqueline Chrystie-Lowe.

“She has given everyone time to understand the topic, and also practised a lot of revision techniques with us. All of this meant that I wasn’t panicking at all when it came to the actual exam,” Siena said.

She will now move onto the second year of her level three extended diploma in creative media production (film and broadcast).

“With every time you have to resit an exam, it chips away at a student’s confidence,” said Ms Chrystie-Lowe.

“But my advice to them is to get the pass and then it is done.”

Jaycy and Siena were among more than 36,000 people aged 17 or above in England to have passed GCSE maths today, many of whom would also have been resitting the exam.

According to figures published by the Joint Council for Qualifications, 160,519 older learners in England sat GCSE maths this year, of whom 22.6 per cent achieved at least a grade four.

Meanwhile, 33 per cent of the 148,894 learners in England aged 17 or above who sat GCSE English scored at least a four.

The condition of funding rule, introduced in 2013, means that all students without at least a grade 4 – or a C, under the old alphabetical grading system – in English or maths must continue to study these subjects as part of their study programme.

Those with a grade 3, or D in the old system, must resit the GCSE exam rather than an alternative.

The policy has proved contentious – with many calling for it to be scrapped.

These include Association of Employment and Learning Providers boss Mark Dawe, who reiterated the demand following today’s results.

“We shouldn’t be subjecting tens of thousands of vulnerable young people to multiple failure and demotivating them for another couple of years, so it’s time for the Secretary of State to draw a line through this failed policy,” he said.

And his counterpart at the Association of Colleges, David Hughes said: “After five years of putting students through GCSE resits, colleges can confirm that the policy does not work and is an obstacle to the ambition that we all share for students.”