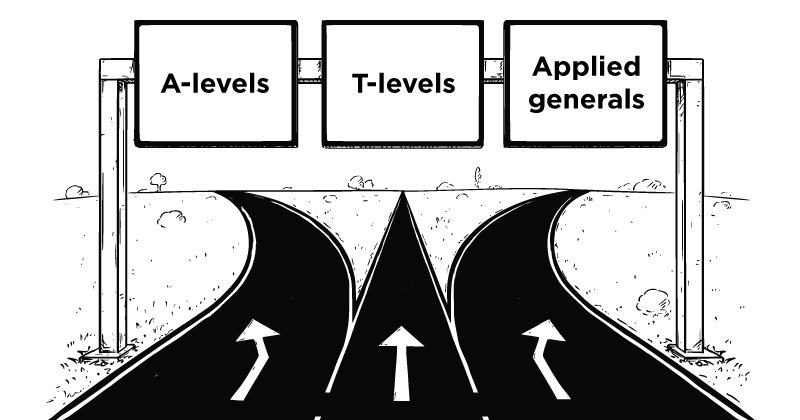 Two post-16 education pathways are not enough: we need an academic route, an occupational route and a career route, argues Rod Bristow

There is a strong consensus in education that we need to do more to offer people a clear pathway to acquire the knowledge and skills they need to succeed at work. That’s why support for the idea of T-levels remains very strong. But as is so often the case with good ideas, concerns about T-level implementation are plentiful.

There are deep concerns about the proposed system of awarding bodies tendering for the new T-levels. These are concerns I share, and when GCSEs were involved, the government shared them too. But risk to T-levels associated with the tendering process pales, when compared to their insufficient clarity of purpose.

The vocational qualifications landscape is complex. First, due to the sheer volume of qualifications – because there are a lot of different jobs, many of which overlap, and qualifications, as well as jobs, have evolved over many years. They will continue to evolve in the future too, adding further complexity.

Vocational qualifications generally serve one of two broad purposes. Some enable access to a specific job or occupation, whereas others are broader and enable access to a number of different occupations within a sector – either directly or via university. Through T-levels, the government has made a creditable attempt to streamline a large number of occupations into coherent groups. But there is confusion as to whether these two different purposes ought to co-exist. It is essential to address this confusion before T-levels are designed.

With huge growth in AI and automation, most countries are thinking deeply about how their education system supports the future of work, and no country has done more thinking about this than Singapore.

Singapore’s success in education is underpinned by long-term thinking and deep coherence across the entire system. They promote three post-16 pathways:

This last pathway enables progression either directly into a job or into a job via university. The key point is that people are prepared for careers, not just jobs, which will themselves change enormously during the lifetime of a career. This career-focused pathway provides the combination of academic and practical skills that the future of work demands. Students learn about an entire industry, but also they learn by doing, how to apply that knowledge – and it’s the application of that knowledge that is assessed.

In Singapore, these three pathways provide the basis for a system of ‘bridges and ladders’ that meets the needs of the population and of employers too. Britain should embrace three pathways too.

A simplistic bifurcation between A-levels and T-levels will not meet the needs of learners. The 60 per cent of the population not doing A-levels will want a broader set of choices than to train for a particular job.

The applied general route provides this choice to young people and to adult learners too. But it should be given a better name – perhaps the ‘career route’. We’d then have an academic route, a career route and an occupational route. Of course Pearson has a vested interest – in that the career route is of course the route that BTEC best fits – but it is also in the interests of millions of young people, and our changing economy too.