A second delay to when the Institute for Apprenticeships will take responsibility for T-levels has been confirmed.

According to the institute’s business plan for 2018/19, published today, it only expects to have agreed a “full implementation timetable” for taking on the new technical qualifications by next March.

It was originally meant to take control of them from the Department for Education in March 2018. Then minutes of a board meeting from last November revealed the first delay – that the IfA would not adopt T-levels until the end of 2018.

“By March 2019 we will have agreed a full implementation timetable with the DfE for the transfer of responsibility for the T-level qualification aspect of technical reform,” said its new business plan.

The institute’s five-year strategic plan was also published today, in which its chair, Antony Jenkins, added: “We will agree with the Department for Education a workable transition of responsibility for technical education and develop a cohesive and accessible map for individuals and employers.”

It is well-known that the institute’s chief executive, Sir Gerry Berragan, has major concerns over the proposed delivery timescale for T-levels, and could be the reason for this second delay.

“The last thing we should do is start the first three on the wrong footing and give them a bad reputation,” he said at an Ofqual conference in March.

“We need to deliver these successfully from the outset. I think the timeline for delivery of the initial three pathways is worryingly tight in that regard.”

The first three T-levels are due to be launched in 2020, of which the DfE will initially oversee.

The news of this second delay to the IfA taking on responsibility will put question marks over whether the department will now manage wave two for 2021 starts. 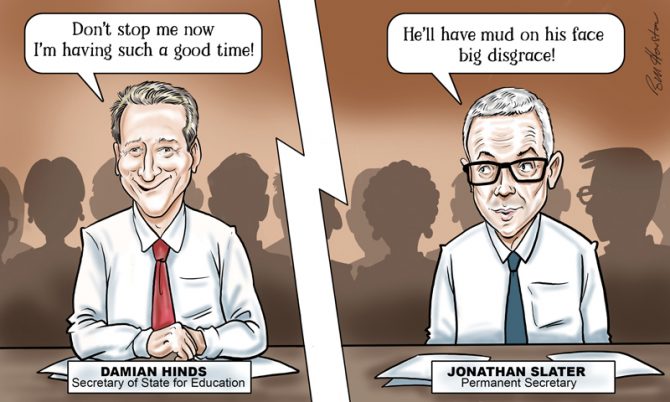 Education secretary Damian Hinds and his permanent secretary Jonathan Slater were at odds last week over the controversial decision not to delay T-levels by a year, following the former’s ministerial direction in May.

Mr Slater told the Public Accounts Committee he had concerns about the lack of “contingency” built into the T-levels timetable.

But his boss insisted to the education committee that the new qualifications are being introduced at a “good pace”.

The IfA declined to comment on the takeover delay but the DfE said it will only transfer T-level responsibility when the time is right.

“We are transforming technical education in this country through the introduction of new T-levels, and will be investing an extra half a billion pounds a year once they are up and running,” said a spokesperson.

“The Institute of Apprenticeships is already playing a key role in the design and delivery of the T-levels – and it is important that we make sure that the transfer of full responsibility is done at the time that is right.”

The IfA’s new business plan included a number of other targets ahead of its takeover of T-levels.

By March 2019, the institute will have published a full set of occupational maps covering all T-level routes, it said.

These maps will be used to “inform the design of T-levels and apprenticeship standards and ensure they are developed consistently and driven by industry need”.

It will also have “recruited, trained and embedded people within the Institute with project delivery and commercial expertise”, by that date, as well as approved the content of three pathways under wave one for digital (production, design and development), childcare and education, and construction (design, surveying and planning).

The institute will also have developed the “procurement and delivery plan for the wave two pathways incorporating lessons from wave one”, by March 2019.