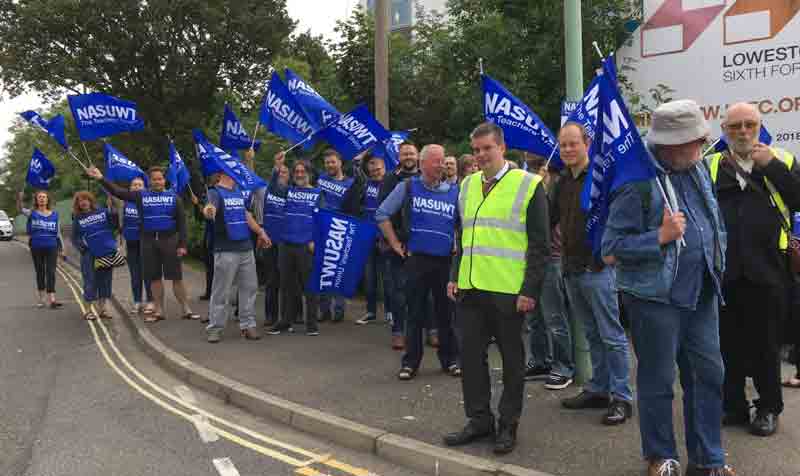 Staff at Lowestoft Sixth-Form College have walked out on the first of six days of strike action protesting a planned merger.

A spokesperson for the teachers’ union said this was because grade two Ofsted-rated Lowestoft is “due to merge with East Coast College, which has significantly worse terms and conditions for its staff”.

“It is very disappointing that the NASUWT union feel it necessary to take this action and I hope that they will reconsider in the light of the actual terms of transfer that are being negotiated,” said David Gartland, the SFC’s principal.

“If we proceed with the merger, the terms and conditions of existing staff will not change, and they are protected”.

He insisted that all existing staff would move to the grade three East Coast College with their existing pay and holiday entitlement, and would retain their public-sector pensions.

“There are no redundancies expected as a result of a merger, due in part to the lean management structure we already have in place,” he added. “Regardless of the outcome of the proposed merger discussions, our aim is to ensure our students continue to have an outstanding sixth-form experience.”

Normal timetabled lessons at the SFC have been cancelled today and a series of non-compulsory drop-in sessions have been organised for students instead.

“These sessions will be run by non-striking teachers and pastoral tutors, support staff and careers advisors,” a spokesperson said.

The 2017 Norfolk and Suffolk area review of post-16 education and training recommended a merger between the two colleges, and they announced in April this year that “there has been significant progress towards this proposal”.

Following “careful consideration”, the SFC launched a public consultation on the proposed merger which ran from March 31 to May 4. The responses and resulting report are due to be published in early July.

A spokesperson for the SFC said a final decision “has not yet been made as to whether the merger will go ahead” and is subject to the board considering consultation responses.

If the decision is made to proceed, the merger will go through on August 1.

The union said it is striking over “transfer of contract of employment with unilateral variation to terms and conditions of service and potential job loss”.

“These restructuring plans could potentially leave teachers on significantly worse pay and working conditions,” she said. “NASUWT members are not only concerned about their future careers, but also the impact that worsening terms and conditions will have on the future recruitment of teachers at the SFC, which in turn threatens the quality of learning and support for students.

“Due to the hard work and commitment of staff, Lowestoft is the top-performing sixth-form college in Suffolk and Norfolk, with a progress score rated as well above average by the DfE, placing the College in the top five per cent of schools and colleges in England.

“NASUWT members want to ensure that teachers continue to receive the pay and working conditions which will support them to maintain this excellent achievement.”

Lowestoft SFC has 743 funded students. Most are on level three A-Level and BTEC study programmes, with others taking level two GCSE and BTEC qualifications.

East Coast College was formed in August 2017 through the merger of Lowestoft and Great Yarmouth Colleges, and now provides further and higher education and training to over 4,000 students.