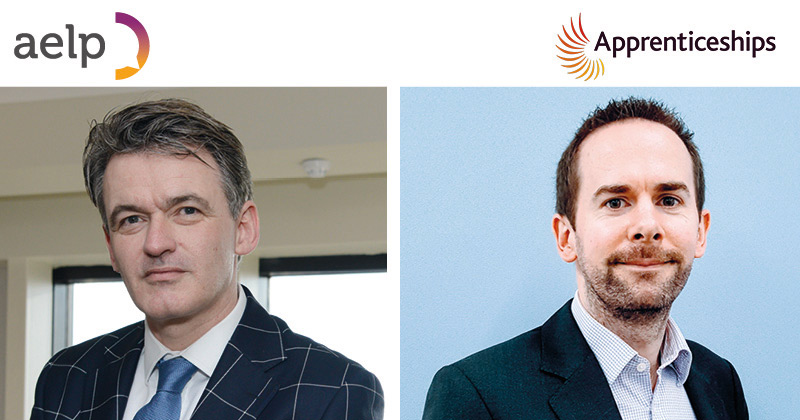 Low-level apprenticeships should not be rubbished by “commentators and policy makers”, the Association of Employment and Learning Providers has claimed in a new report.

The body wants ministers to use government spending and post-18 education reviews as an opportunity to “reverse the sharp fall in level two apprenticeships since May 2017”.

The apprenticeship levy is encouraging large employers to “prioritise higher and degree-level apprenticeships over intermediate levels”, it claims in a paper that hits out at people who believe level two is “not a proper apprenticeship”.

AELP’s boss Mark Dawe (pictured above left) said it is “extraordinary” how many government figures “don’t appreciate how significant level two attainment is for both the economy and the large proportion of young people who leave school without it”.

“The knowledge, skills and behaviours defined at level two are some of the most transformational in the apprenticeship suite of standards,” the paper states, and these are “vital starting points for the young, the inexperienced and the disadvantaged”.

AELP’s report takes aim at, among others, Tom Richmond (pictured above right), a former senior advisor to two skills ministers who now works for the Reform think-tank, who has been highly critical of many level two apprenticeships.

“If all apprenticeships are high-quality at level two, then we would expect to see the numbers increase, because it would be a genuinely attractive option for young people,” said the former advisor to Nick Boles and Matt Hancock.

“It is disappointing to see AELP refuse to acknowledge that some level two ‘apprenticeships’ are nothing more than low-skill, low-wage roles that have been rebadged as an apprenticeship to attract government funding.”

Reform strongly supports more apprenticeships in the service sector, but “too many level two programmes fall well short of international standards and simply would not be recognised as apprenticeships in other countries because they offer so little training”.

AELP believes government intervention is necessary because “the market alone will not incentivise” a reversal.

Mr Dawe’s counterpart at Association of Colleges, David Hughes, said the AELP paper had asked “searching questions” about level two apprenticeships and agreed “there are some sectors where numbers have dropped significantly”.

“We have urged the government to refocus attention on its own definition of an apprenticeship as being for new job entrants,” he said.

“Where young people start a level two apprenticeship, the aim should be to get them to level three at the minimum,” he said.

She wants to “improve the quality of apprenticeships across the board”, by replacing old-style frameworks with new employer-led standards “from level two right up to degree or masters level”.

The Institute for Apprenticeships also weighed in, and claimed it supports “the development of all high-quality apprenticeships at levels two to eight”.

“The Institute sees high-quality apprenticeships as crucial routes in helping young people reach their potential, providing excellent career development, as well as retraining opportunities later in life,” it said in a statement.