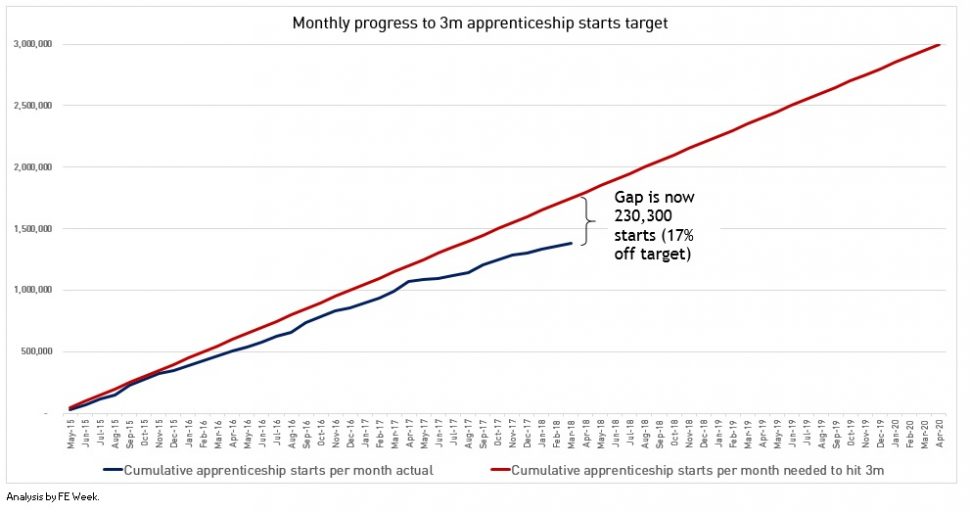 Apprenticeship starts for March are down 52 per cent compared with the same period in 2017.

There have been 23,900 starts recorded so far in March 2018, compared with 50,000 in March 2017 according to the Education and Skills Funding Agency’s monthly apprenticeship statistics update, published this morning. 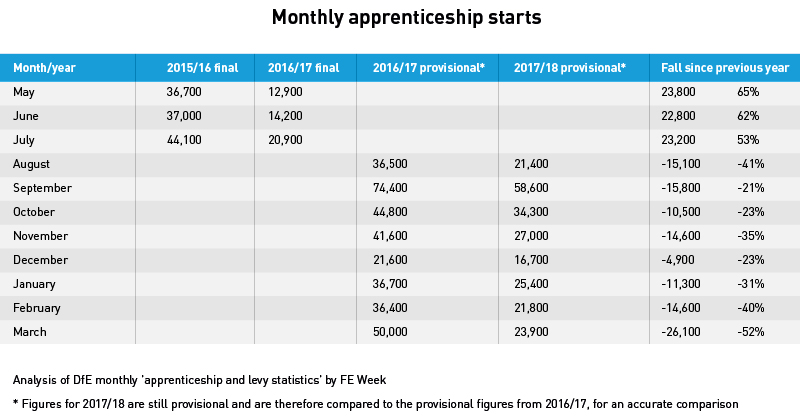 Today’s figures come the day after the government went on the defensive over the apprenticeship levy.

An open letter signed by skills minister Anne Milton, Institute for Apprenticeships boss Sir Gerry Berragan and dozens of senior figures from business schools, businesses and other organisations urged the sector to “support employers in making use of the levy”.

Mark Dawe, boss of the Association of Employment and Learning Providers, said he understood why the skills minister had gone on the defensive – and that the AELP also “strongly supports” the levy.

“But we hope that when she addresses the AELP conference in a few days’ time, she will signal a suspension of charging SMEs for apprenticeships for 16-24 year olds at levels two and three,” he said.

“With the government showing no intention of abandoning its 3 million target, start numbers are now so far behind the curve, action has to be take now to reverse the falls.

“They are damaging to productivity, social mobility and the labour market response to Brexit.”

Gordon Marsden, shadow skills minister, said the figures were “further damning evidence of the deep concerns” from many across the sector.

“Government must get a grip on the starts fiasco and the concerns about the levy rapidly. Otherwise they will jeopardise the huge life chances apprenticeships offer young people and also the long term prosperity of our economy,” he said.

“The government will claim quality is rising, but we think it’s far too early to say that. Critics will say the levy isn’t working, but we’re clear it was the right move,” said Stephen Evans, chief executive of the Learning and Work Institute.

“Changes are needed to make apprenticeships work better. But this should be about reforming the current system, not ripping it up,” he said.

According to the commentary that went alongside today’s figures, “care should be taken when comparing individual months with previous years as they are unlikely to provide a meaningful year on year trend” as the “profile of apprenticeship starts changed significantly in the run up to the introduction of the levy and beyond”.