There is no doubt that how we educate and train people throughout their lives has a profound impact not only on their own chances in life but also on London’s and the UK’s economy and competitiveness.

The mayor of London, Sadiq Khan, and I are determined that all Londoners have the opportunity to fulfil their potential and are able to enjoy the capital’s economic prosperity. In the aftermath of Brexit, it is vital that London and the regions have more control so we can protect jobs and investment.

Sadiq is certainly not choosing to take money from learners

Here in the capital, we have a bigger population than Wales and Scotland combined, but we have far less control over how taxes are spent and public services are run. That is why the devolution of the adult education budget (AEB) to London and the regions will be such a landmark moment – ensuring we can tailor the capital’s adult education system to put the needs of individual Londoners at its heart.

The devolved AEB will mean that the mayor is responsible for an additional £311 million a year – that is approximately 25 per cent of the national budget.

But it is no use simply giving the mayor notional control over these funds. He also needs the resource to allow him to spend the funds swiftly and effectively to meet the needs of Londoners and London’s economy.

So far, the mayor’s request to the government for an ongoing and sensible budget to administer this funding has been denied.

The mayor was awarded an implementation budget of £235,139 for 2017/18. This is significantly less than the cost of implementing devolution and from 2019/20 the Department for Education has said it will not be devolving the administration budget associated with AEB.

In addition, the Education and Skills Funding Agency has claimed that it does not intend to give the mayor’s office or the mayoral combined authorities a “service offer” which would include procurement, audit, contract management, direct access to data and changes to the individualised learner record systems to incorporate local funding requirements.

While the mayor and I warmly welcome devolution of the AEB, there is little point in the government giving us control on paper over this huge sum of money if it is not going to fund a model that will allow us to administer it effectively and allow us to deliver the best outcomes. 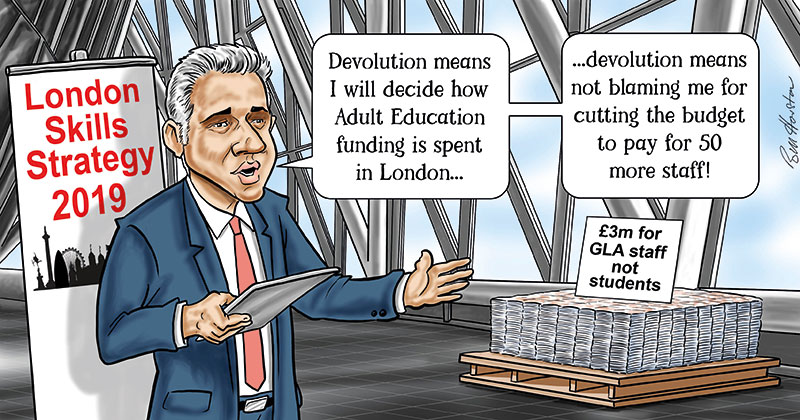 READ MORE: Mayor of London blames DfE for having to top-slice AEB

Should the government continue to refuse to devolve the associated administrative costs of delivering the AEB to London, the mayor will be forced to fund devolution using a combination of his own budgets and a small part of the AEB itself.

Sadiq is certainly not choosing to take money from learners; this is being forced upon him by the actions of the government. However, it is important to look at this in the context of the full budget.

The staff costs associated with this will be less than one per cent of the £311 million a year being devolved.

The most important thing here is ensuring that this devolution delivers the maximum benefit for the maximum number of learners. That is why we want to continue dialogue with the government in the hope that it accepts that the mayor and combined authorities need additional resource to make the most of this opportunity.

So far, ministers have not been forthcoming about how much they are saving by passing on the responsibility for this budget – and it is not unreasonable to ask that whatever this saving is, it is passed to us for genuine management costs.

Jules Pipe is the deputy mayor of London for planning, regeneration and skills