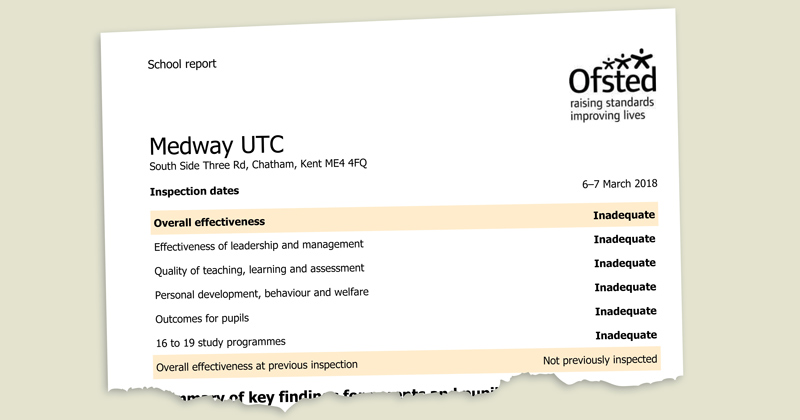 The governors of a university technical college have been slammed for “abrogating” their responsibilities, in yet another damning Ofsted report into one of the 14-to-19 schools.

Medway UTC was branded ‘inadequate’ across the board in a report published this morning and based on an inspection in early March.

The verdict, which comes in the same week that former chancellor and UTC architect George Osborne said the 14 start age hadn’t worked, means that half of all currently open UTCs that have been inspected are now rated at either grade three or four.

“Until very recently, governors have abrogated their responsibility for maintaining a high standard of education in the school,” the report said.

Governors and leaders at the school, which opened in 2015, had not “demonstrated that they have the capacity needed to secure the improvements needed”, and had “failed to support staff at all levels to do their jobs”.

There was a “culture of low expectation across the UTC”.

The sixth-form curriculum was “too narrow” and “does not meet requirements”, with a “lack of suitable and relevant non-qualification activities” to support students with their “chosen study programmes”.

A-level outcomes in 2017 were “poor”, and students’ progress was “significantly below the national average”. Current student progress remained ‘inadequate’.

“Students had been accepted on to courses without having previously obtained suitable skills or levels of understanding,” the report said.

Communication and partnerships with local employers was found to be “variable”, with some parents and students expressing “disappointment” at work experience placements.

But inspectors also noted that, following a recent change in leadership, “senior leaders and governors rightly recognise that the current provision is inadequate and pupils underachieve significantly”.

Paul Cottam, who took over as interim principal at Medway in January, said he was pleased that inspectors had recognised the improvements the school had already made.

“We are clearly not there yet and more needs to be done to ensure that Medway UTC is a good school which offers the very best learning experience and outcomes for its students,” he said.

The school is in “advanced talks” with Howard Academy Trust about joining the multi-academy trust, he added.

Medway is the latest in a series of UTCs to have hit troubled times.

It’s the sixth of the specialist technical education providers currently open to be rated ‘inadequate’, and it now means that 13 of the 26 existing UTCs that have been inspected are rated either grade three or four.

A further eight UTCs have so far closed, largely due to recruitment issues – six of which were grade three or four at the time they shut their doors.

Speaking at a Commons education committee hearing on Wednesday, Mr Osborne, who was involved in the inception of the project, said the model “clearly hasn’t worked” and “if I was back at the Treasury I would be looking at that”.