Colleges delivered less than a quarter of traineeships last year and nearly half across the country had no starts whatsoever, according to FE Week analysis of government figures.

In fact, the Education and Skills Funding Agency is aware that only 24 per cent of traineeships were delivered by general further education colleges.

Just 110 colleges delivered the programme last year, a little over half of the total in England. Of these, a mere eight recorded 100 or more starts. In contrast, independent training providers had 14,430 starts last academic year, or 71 per cent of the total.

Catherine Sezen, senior policy manager at the Association of Colleges, defended colleges for their low level of engagement blaming rigid traineeship rules, particularly around the length of the programme.

Ms Sezen said colleges often felt it is “more appropriate, particularly with 16- to 18-year-old learners to put them on a full year’s study programme” that could be “very similar to a traineeship” but with more time for the learner to focus on improving their skills, including English and maths.

“Greater flexibility in the traineeship model would probably lead to increased uptake by both students and colleges,” she added.

Traineeships, launched in 2013, are designed to get young people aged 16 to 24 ready for work or an apprenticeship. They can last up to six months, and include a period of work preparation, English and maths courses and a work experience placement.

The much higher level of starts at ITPs prompted Mark Dawe, the boss of the Association of Employment and Learning Providers, to reiterate calls for his members to be more involved in developing prestigious new T-level qualifications.

T-levels, which will be introduced from 2020, will include a 45-day mandatory work placement. This is seen by many as the biggest potential barrier to their success, with concerns raised about the willingness and availability of businesses to offer placements in sufficient numbers.

FE Week asked the ESFA for the number of traineeship starts per provider for each year from 2013/14 to 2016/17, and worked out the breakdown according to provider type.

Our analysis showed that colleges delivered 19,501 of the 74,813 starts in that time period, with independent providers accounting for 50,782.

The remaining 4,530 – or five per cent – of starts were delivered by local authorities, sixth-form colleges and by others, such as specialist colleges.

The fall was more dramatic among colleges than private providers. And some of the colleges with the highest number of starts, such as Eastleigh, subcontract much of their provision.

NCG had the second highest number of starts of any college, with 1,170 over the four years covered by our data, although it subcontracts some of this provision.

Joe Docherty, the group’s chief executive, said it “encourages the take-up of traineeships across its colleges”, though he believes “there needs to be further marketing of traineeships to make sure their purpose is understood”. 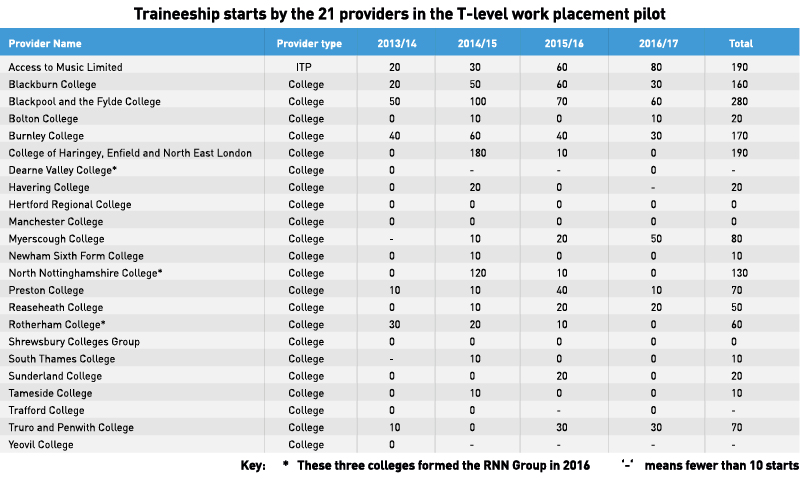 He urged the government to make it “clear that traineeships prepare people for apprenticeships, jobs, further training and full-time education”.

And Kit Davies, the principal of North Hertfordshire College, which had 220 traineeship starts last year, suggested that “incentivising businesses to take individuals on work placements” could help boost numbers.

The government, which has faced criticism for not doing enough to promote traineeships, launched a social media campaign last month.

It is part of its existing ‘Get in go far’ drive which it has already used to spread the word about apprenticeships through Facebook and Twitter. This new branch of the campaign operates under the slogan ‘Traineeships: Everything you need to know’.

“Traineeships offer employers the opportunity to shape training to meet their needs and build the high-quality, highly-skilled workforce of the future, and we encourage businesses across a range of sectors to get involved and offer these work experience placements,” a Department for Education spokesperson said.

Colleges have been given a key role in piloting the work-placement element of T-levels – but their lack of engagement with traineeships raises questions about their suitability.

Each learner on these prestigious new qualifications will have to undertake a 45-day placement as part of their course.

The Department for Education has tasked 21 providers with carrying out pilots to test how this will work in practice. But 20 of these are colleges and just one an ITP.

AELP boss Mark Dawe believes colleges’ lack of engagement with traineeships supports his argument that ITPs should have a much larger role.

He has been “perplexed” by the extent to which colleges have been given far more of a leading role than colleges: “I know some colleges are successful at running traineeships, but these figures show that ITPs provide the bulk. One of the primary reasons for this is because they are so adept at engaging with employers. Some colleges are good at that too, but this indicates to me that ITPs are a more natural fit for the T-level pilots. 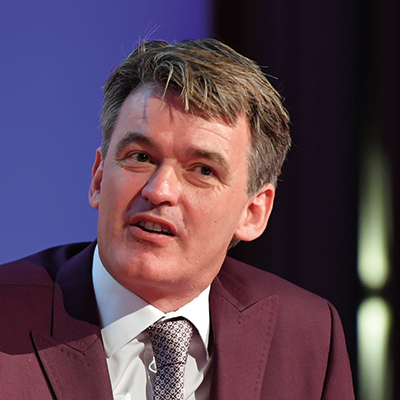 “Our argument all along has been that to make T-levels a success the government must involve ITPs and their expertise in employer engagement.”

The Association of Colleges insisted that colleges’ lack of engagement with traineeships had no bearing on their ability to deliver on the T-level work placements.

“Colleges already have lots of contact with employers, in terms of work experience, apprenticeships and additional training that they do for employers, and T-levels will encourage a growth in that,” said Catherine Sezen, the AoC’s senior policy manager.

The learners on T-levels will be “very different” from those on traineeships, and as such the challenges will be different.

T-level learners will be studying at a much higher level than those on traineeships, and will be on their second year of a two-year programme when they begin their work placement – whereas trainees are often just weeks into their programme, she said.

Stephen Evans, chief executive of the Learning and Work Institute, said employers and learners would need first rate support and guidance to get the most out of placements, and “the ability of a provider to do this isn’t determined by whether they’re a college or independent training provider”.

“I hope, therefore, that the government will focus on engaging and supporting employers” and “work with the best providers from across our sectors”.

A spokesperson for the Department for Education said it was “working to determine how best to make work placements work for employers across all technical routes.”

How some colleges have made traineeships work without subcontracting

Not all colleges subcontract their traineeship provision. FE Week spoke to a number that are running the programme themselves – and running it well.

These include North Hertfordshire College, which received an ‘outstanding’ grade from Ofsted for its traineeships, in a report published last November.

It’s had 530 starts over the four years the programme has been running, according to our data – 220 of which were last year.

Dave Hitchen, the college’s director of transformation, said it delivers the programme itself, through the college’s training arm Hart Learning and Development, “because we feel it meets a really important community need”.

The college has the “good employer relationships that you need to run a successful traineeships programme” as well as “good community engagement, in terms of referral partners like JobCentre Plus” which means they have “lots of pathways into the learners”.

With most learners it’s a matter of confidence, and finding which sector they want to work in

He admitted that finding work placements could be challenging – and a lot of hard work.

The “ideal case scenario” would be a company offering a work experience placement for a number of trainees, with the intention of employing some of them at the end.

But in other cases the college’s placement coaches would talk to trainees about their career goals then “hit the phones and try to find employers in the local area that meet that aspirational need” which can be “very time consuming”.

Because traineeships often attract learners who’ve had “a difficult educational experience” or that have “barriers that need breaking down”, it can be “a difficult job” to persuade employers of the benefits of taking on a trainee.

“Our coaches do a great job, but it takes a progressive, forward thinking employer to do that,” he said.

Paul Keegan, group director for apprenticeships and business development, said that “contracting out didn’t serve any purpose” as the college has the capability to deliver the programme as well as the “relationships we already have with employers through apprenticeships”.

Traineeships have proved a “really strong pathway” for learners.

“What we found with most learners is that it’s a matter of confidence, and finding which sector they want to work in,” he explained.

Mr Keegan said one of the secrets to the college’s success was the time it spent with learners to understand the field they wanted to work in – which could involve trying different placements before finding the right one.

“If you map the learner to the employer, it becomes a very direct route,” he said.

Colleges explain why they dropped the programme

More than a few colleges have stopped providing traineeships. FE Week asked them to explain why they took the decision and the grave problems they see with the programme.

“The inflexibility of the traineeship funding model, along with the strict condition of funding rules around maths and English,” made them “unsuitable” to provide “the highest levels of progression to apprenticeships”.

The condition-of-funding rule requires learners without at least a grade C or 4 in English and maths GCSE to continue studying these subjects post-16.

Mr Hintz said that this rule led to an “over-emphasis on passing maths and English qualifications rather than gaining skills for the industries learners are preparing to enter” through the programme.

Traineeships are a good example of over regulation disincentivising innovation

“Traineeships are a good example of over regulation disincentivising innovation in curriculum design that meets the needs of industry,” he said.

Pat Carvalho, the college’s principal, said it stopped in order to “focus on apprenticeships, to improve their quality”.

The college also wanted to “concentrate on more local delivery where employers were looking for shorter programmes such as sector work-based academy training”.

West Nottinghamshire College had the second highest number of traineeship starts of any individual college, according to our data – but the “vast majority” of those were actually delivered by subcontractors.

The college “took the strategic decision” to stop delivering traineeships “after 2016/17 because we found it wasn’t delivering the outcomes we wanted in terms of sustainable employment or progression into apprenticeships,” a spokesperson said.

Not all colleges that have stopped delivering traineeships made a conscious decision to do so.

The RNN Group, made up of Rotherham, North Nottinghamshire and Dearne Valley colleges, had around 180 starts between 2013/14 and 2015/16, but none last year.

A spokesperson for the group said it “continued to have the option available” but was “currently seeing little demand”.