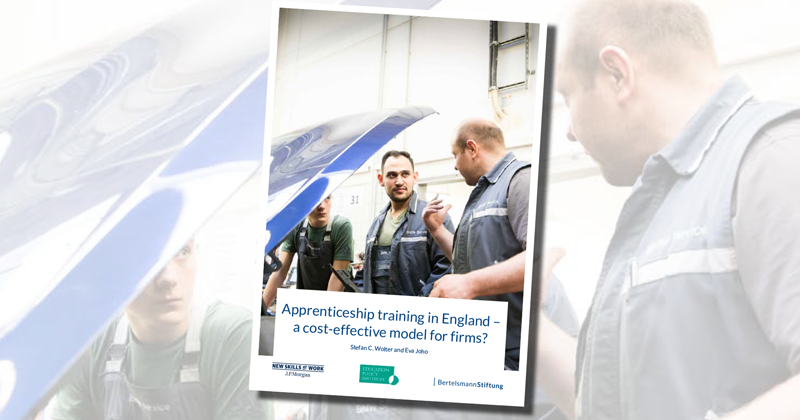 The government should do more to boost the number of 16- to 18-year-olds doing apprenticeships due to the “overwhelming” benefits to both employers and apprentices, a new report has urged.

‘Apprenticeship training in England – a cost-effective model for firms?’, published today by the Education Policy Institute, looked at the potential costs and benefits for businesses and individuals if England adopted a Swiss-style apprenticeship model.

The report, by education economist Professor Dr Stefan C Wolter and Eva Joho, concluded that the benefits for both apprentices and employers were greatest for the youngest apprentices.

“Given the overwhelming benefits to both firms and apprentices” the report urged the government to “consider the case for expanding apprenticeships in England among 16- to 18-year-olds, in line with other advanced economies”.

Today’s report, produced in partnership with German think-tank Bertelsmann Stiftung and supported by JP Morgan, analysed whether English employers could expect a net benefit when training apprentices in a similar manner to Swiss firms.

They used data from Switzerland, alongside UK wage data, to simulate the costs and benefits to both employers and apprentices in 10 occupations.

The report concluded that employers with apprentices under the age of 19 for the duration of their apprenticeship had the highest chance of “breaking even at the end of the training period” because “minimum wages increase substantially afterwards”.

But “from the perspective of apprentices” programmes that started “at an early age, even at a very low pay, would in most cases also generate the highest private rates of return” compared with starting later.

Longer apprenticeships were “likely to bring higher returns for both employers and apprentices”, the report said, “due to productivity increases over the course of training”.

In a three-year apprenticeship, similar to the Swiss model, an employer’s “costs usually surpass benefits” in the first year, but by the third year “a net benefit arises”.

Other recommendations from the report include targeted support for small companies “especially in sectors or regions dominated by small- and medium-sized enterprises”.

This was because “big companies may be more likely to experience net benefits from hiring apprentices than SMEs, due to economies of scale and a different salary structure”.

“This report brings some much needed evidence to debates on the future of apprenticeships policy,” said David Laws, the EPI’s executive chairman.

“In learning from countries with successful training programmes, England can ensure that a sustained expansion in apprenticeships sees positive returns for both employers and young people.”