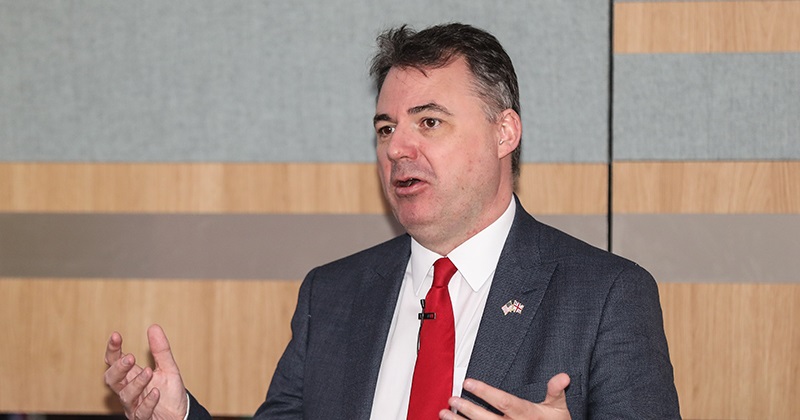 The Federation of Awarding Bodies has announced skills and enterprise policy expert Tom Bewick as its new chief executive today.

Mr Bewick (pictured above speaking at FE Week’s Annual Apprenticeships Conference last week) will take up the helm from May 1, replacing John McNamara, who has led FAB on an interim basis since the departure of Stephen Wright in December.

“Following a robust and comprehensive recruitment process, the board decided on a candidate that brought the strongest possible experience in lobbying and policy influencing of the skills and qualifications agenda,” said FAB chair Paul Eeles.

Mr Bewick has an “exemplary track record” of “building solid representative industry organisations” and “working with government”, and has “influenced skills policy spanning a 25-year career both in the United Kingdom and internationally, most recently in the United States”, Mr Eeles said.

“I’m really looking forward to working with Tom over the coming months as we strive to put the value of our qualifications and assessment organisations at the heart of the UK’s rapidly evolving technical education, skills and apprenticeship systems.”

He added the board’s thanks to Mr McNamara for “his leadership of FAB through this interim period”.

Mr Bewick said he was “delighted” to have been appointed as the new FAB boss.

“Throughout my career I have been passionate about leading and representing organisations committed to growing a highly-skilled and qualified workforce,” he said. “The fact is that strong qualifications, assessment and awarding organisations are the engine room of a 21st-century economy.

“Without good qualifications, people can’t get the rewards they deserve and our society will not succeed. I will be unrelenting in putting forward the positive case, representing FAB members’ interests, and explaining why the public should listen to what is a fantastically comprehensive and diverse industry.

“I’m proud to represent a sector that provides so many individuals, employers and communities with the means to succeed up and down the land. I can’t wait to get started.”

Mr Bewick is co-founder and board director of Franklin Apprenticeships in the US, and founded the Transatlantic Apprenticeship Exchange Forum in 2015 to promote opportunities for UK training providers in the US.

He led the International Skills Standards Organisation Ltd for four years, from 2011 to 2015, and prior to that was chief executive of Enterprise UK, a former government quango, from 2010 to 2011.

Other government roles include adviser to the minister for adult skills in the early 2000s.

He has also been a council member for Brighton and Hove City Council since May 2015.