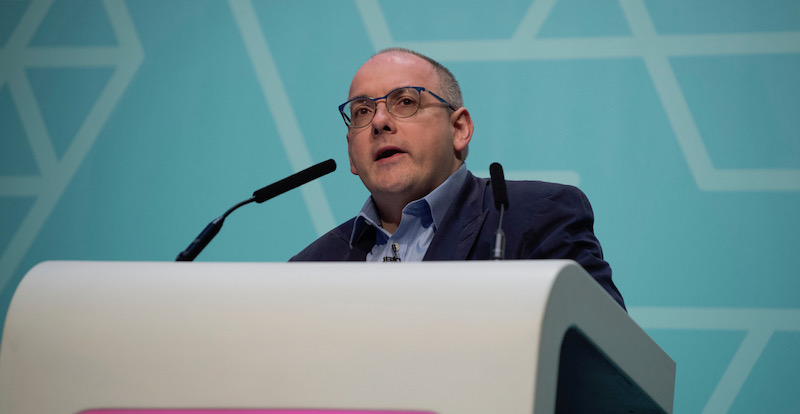 The chair of the Commons education select committee has urged the government to “deliver” on its election promise to cut travel costs for apprentices.

Robert Halfon made the call in his speech on the final morning of FE Week’s Annual Apprenticeships Conference in Birmingham.

“In its manifesto the government pledged to help apprentices with transport costs – it must deliver on this,” he said.

“That is why our committee challenged the education secretary on this when he appeared before us this week,” Mr Halfon said.

The former skills minister, who was elected chair of the influential House of Commons education select committee following last year’s general election, used his speech to outline the five rungs that would help “more people climb the ladder of opportunity that apprenticeships offer”.

The first rung, he said, was social justice, “because for many people an apprenticeship is not simply a job, not simply training – it’s a chance for them to build a better life”.

Delivering on the travel pledge was just one way that social justice could be achieved through apprenticeships, Mr Halfon said.

Other proposals put forward included calls for a specific social justice fund for disadvantaged apprentices, and for the government to “commission a social impact study into how the benefit system helps or hinders people becoming apprentices”.

To ensure that “everybody knows about” apprenticeship opportunities the second run on Mr Halfon’s ladder of opportunity was “high-quality careers advice”.

The current system is “still far too complex and confusing”.

Instead, he urged the government to create a “unified national careers and skills service” and to deliver on its election promise for a “UCAS-style system for FE and skills”.

The third rung on the ladder, Mr Halfon said, was the government’s three million target – which he said he supported “because it concentrates the minds of the treasury”.

“But these starts must be high quality,” he said.

Mr Halfon said he was “particularly concerned about subcontracting”, and welcomed a pledge made yesterday by Ofsted chief inspector Amanda Spielman for the education watchdog to crack down on providers that subcontract purely for the money without taking responsibility for the quality.

Progression was the fourth rung on the ladder, Mr Halfon argued.

Research had shown that too many people were “getting stuck” at level two.

“Instead there should be an expectation that people keep learning and keep moving from level to level: increasing their skills and deepening their knowledge year after year,” Mr Halfon said.

Degree apprenticeships were “an incredibly important part” of enabling people to “keep climbing the ladder of opportunity”.

He urged the government to “incentivise” the growth of degree apprenticeships, and to do more to promote them.

The final rung on the ladder, Mr Halfon said, was job security.

“The aim should be to help everyone in this country, no matter their background, gain the skills that will get them a good, secure job,” he said.

“That is what this is all about – an apprenticeships and skills nation of rising productivity with social justice for all. A ladder of opportunity not just for individuals but for the whole country.”