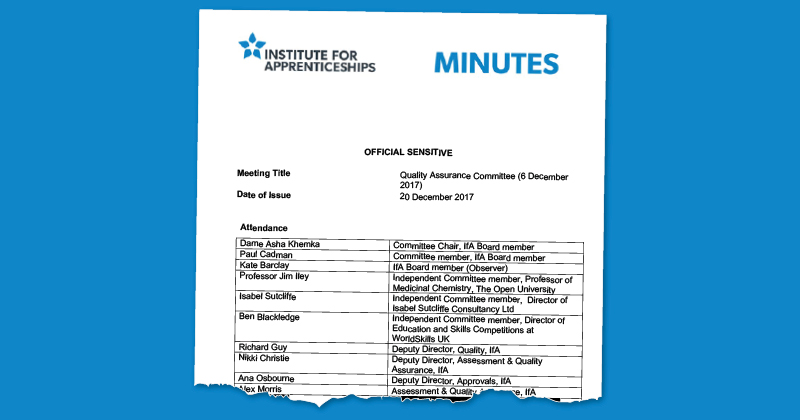 The Institute for Apprenticeships has “concerns” about conflicts of interest in its new model for quality-assurance, FE Week can reveal.

This emerged from minutes for a meeting of the IfA quality assurance committee, obtained via a Freedom of Information request.

The body “confirmed it had concerns about conflicts of interest with EQA providers in general” during the session last December.

It also agreed to develop “a register of interest for EQA providers” which “should list any declared interests that EQA providers have and how these are to be mitigated”.

The minutes did not specify what the concerns were and a spokesperson for the IfA refused to explain this week.

“The process of recognising bodies to deliver EQA has reinforced the importance of investigating potential conflicts of interest,” he admitted.

“Some conflicts can be managed, but others, for example being an end-point assessment organisation, will prevent that body from delivering EQA.”

John McNamara, the Federation of Awarding Bodies’ interim boss, said potential conflicts arise where employer groups or professional bodies providing EQA have an associate company or subsidiaries that “are doing other things in the apprenticeship market” such as end-point assessment.

There is a “perception” that in this situation the EQA provider might give preferential treatment to the assessment organisation within its own group, Mr McNamara explained.

“It’s up to the EQA provider to demonstrate it’s got no favouritism,” he said.

This has led to a proliferation of different organisations being named in apprenticeship assessment plans to provide EQA.

But to date just four have been approved by the IfA – People 1st, Tech Partnership, RMISC and Skills for Care – in addition to the IfA and Ofqual.

One provider was rejected at the December meeting – but the IfA refused to say which one.

A further 32 organisations, named as EQA providers for 50 standards, are still awaiting approval.

These include one organisation that’s also on the register of apprenticeship assessment organisations – but also a number that are part of the same group as an EPA organisation.

FE Week asked the IfA to explain what would happen in cases where it had not yet approved an EQA provider named on an assessment plan, particularly where there were apprentices that had gone through end-point assessment.

No answer was forthcoming.

However, we understand that at least one provider in this position had been told to carry out its duties as originally planned until told otherwise.

An IfA spokesperson said that “94 per cent of apprentices with EPA due in the next 12 months” are on standards with an approved EQA provider.

“We are working to approve the providers which cover the remaining six per cent,” he said.

What is the role of external quality-assurance?

External quality-assurance has a vital role to play in ensuring that apprenticeship assessments are reliable and deliver the outcomes needed.

Employer groups developing apprenticeship standards can as previously explained choose between an employer-led approach, a professional body, the IfA itself or the exams regulator Ofqual.

All four options are overseen by the IfA, to ensure “quality, consistency and credibility”.

The former IfA chief executive Peter Lauener said last August that the institute puts “employers’ needs and choices at the heart of our work”, and it is “important that they have a choice in how external quality-assurance is undertaken”.

In the case of the employer-led approach, the provider “must be a legal entity” and arrangements would include “governance set up by the employers”.

A professional body is defined as a “not-for-profit organisation seeking to further a particular profession, the interests of individuals engaged in that profession, and the public interest”.

The IfA was originally intended as the EQA provider of last resort, but it has proved to be the most popular – with 90 approved standards choosing it. Open Awards Ltd runs the EQA on the IfA’s behalf.

The Institute for Apprenticeships’ quality-assurance committee has responsibility for reviewing “whether or not standards or assessment plans remain fit for purpose”.

It is also tasked with checking whether EPAs are being “operated effectively”.

It has five members, two of whom are on the IfA board, and three of whom are independent.