More than two thirds of the university technical colleges visited by Ofsted in the last year received ratings that were less than ‘good’, according to FE Week analysis.

But the organisation which oversees UTCs has hit back, saying it believes the watchdog’s inspection regime is not designed to measure their performance in the most accurate way possible.

Ofsted inspected 14 UTCs between February 2017 and February 2018, but just four of these, or 29 per cent, received a grade two, while none at all were rated ‘outstanding’.

Meanwhile, 10 (71 per cent) were rated at grades three or four, both of which are considered unacceptable by Ofsted.

The Baker Dearing Trust told FE Week that UTCs are “new and innovative” colleges which are inspected “before many of them have a settled position in the local education landscape”.

Its spokesperson claimed that the trust hopes that “over time”, the “outstanding destinations” found at UTCs will “carry more weight” in Ofsted reports.

According to FE Week’s analysis, a total of 29 of the 14-to-19 technical institutions – including several which have since closed – have now been inspected, of which 17 (59 per cent) had the lowest two grades. 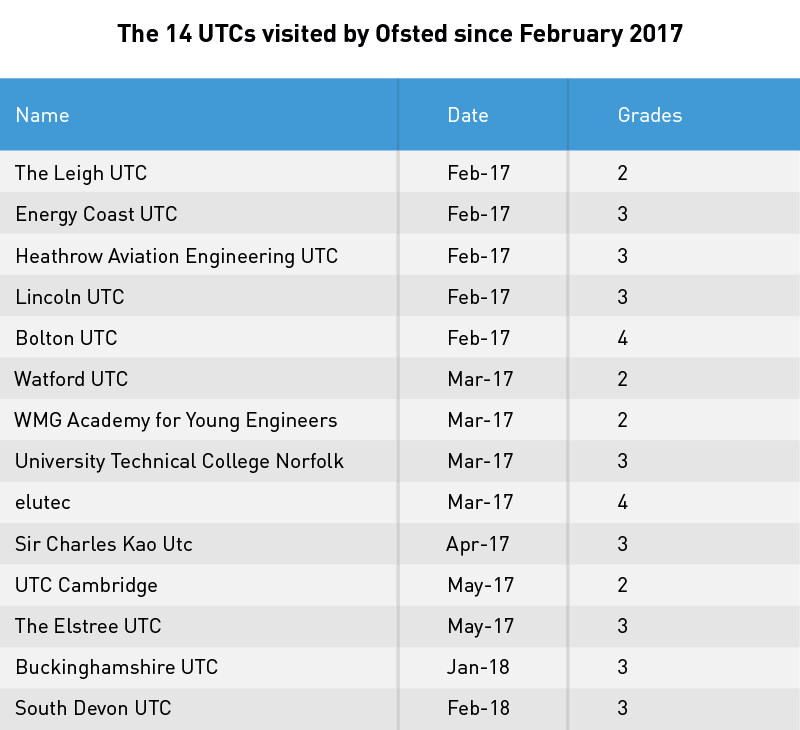 BDT’s spokesperson said that the “objective” is to have every UTC rated ‘good’ or ‘outstanding’, and claimed the trust works “closely and constructively” with those that have yet to reach the benchmark.

The UTC movement launched in 2011 with the backing of former Conservative education secretary Lord Baker.

These specialist technical education providers are seen by many as unwelcome competition to more established general FE and sixth-form colleges, which consistently return a much higher proportion of higher Ofsted grades.

UTCs’ Ofsted results remain well below those of independent training providers, sixth-form colleges, and general FE colleges – the last of which have themselves seen rapid recent improvement over the past year.

FE Week’s last report on UTC inspections in March 2017, showed that the education watchdog had visited 20 of the providers. Only nine (45 per cent) were considered good enough for the upper two grades.

Our new analysis reveals a fall of four percentage points in the past year.

BDT pointed out that if only the 23 UTCs that are still open and have had inspections are taken into account, 52 per cent are at grades one or two.

This still however places UTC performance well below that of other FE providers.

FE Week revealed last month that as of February 7, just under three quarters of colleges are now rated ‘good’ or ‘outstanding’.

The proportion of sixth-form colleges achieving the top two grades was at 81 per cent in September, and independent training providers were at 80 per cent.

The most recent inspection reports into UTCs, at the institutions in South Devon and Buckinghamshire, both produced grade threes.

It was the second ‘requires improvement’ rating in a row for Buckinghamshire, which had just 147 students on roll, despite a capacity of 600, in the last academic year.

Inspectors said that overall progress in English, maths and science has been “well below” the national average for the last three years, and the quality of teaching is “inconsistent”.

It was the first time South Devon UTC has been subject to an inspection since it opened in September 2015. The college currently has just over 200 students, but senior leaders were criticised because they’ve “not secured consistently effective” teaching as it has grown in size.

Most UTCs have struggled since they were established in 2010, mainly because they’ve not been able to attract enough pupils to stay financially viable. Eight have so far closed.

An investigation in January by FE Week revealed that almost every UTC missed their recruitment targets last year, leaving them with combined debts of over £11 million.