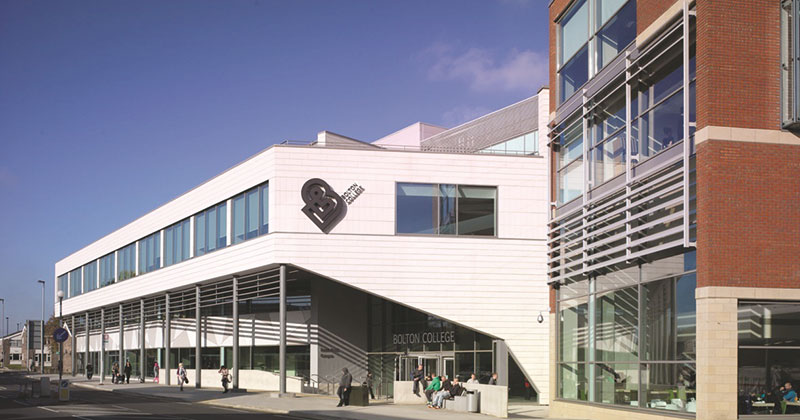 A college is joining a university using an “innovative” new merger model that’s acting as a pilot for future partnerships between FE and HE.

The alliance, between Bolton College and the University of Bolton, means the college, which has a grade two from Ofsted, will retain its own principal and governing board, giving it greater “protection” than it would through a traditional merger.

The model was proposed by the Department for Education, which described it as “exciting” and “the first of its kind”.

“This is an innovative new business model for further and higher education and we will be evaluating its success, particular how it benefits students and gives them the high quality education they deserve,” a spokesperson said.

“The university is not looking to come in and try to run the college,” said Bill Webster, Bolton College’s interim principal.

“It’s about making sure that the university has sufficient control to protect its ability to do what it’s been asked to do, at the same time as giving a fair degree of autonomy to the college.

“Should there be future HE/FE type mergers this is potentially the model it’s going to be.”

“It’s great to see a merger model that allows greater protection for FE provision at colleges,” said Julian Gravatt, the deputy chief executive of the Association of Colleges, who is pleased the DfE is “working to make amendments where mergers may not have succeeded before”.

Most college mergers see one of the institutions dissolved and its assets transferred to the other partner.

But in this case, the college is changing its legal status from August 1 to become a company limited by guarantee with the university as its sole member, which will give the HE institute ultimate control.

The new company is being designated as an FE institution under the FE and HE Act 1992, so it will continue to operate in the same way as an FE college. Its principal will still be accountable to the college’s governing board.

Mergers typically result in a single governing board and consolidated leadership team.

The approach is the result of the DfE’s “very strong wish” to develop a new merger model that would “ensure that the integrity and assets of FE are absolutely protected”.

“The university is signing an asset deed that completely protects the assets of the FE establishment,” said Mr Webster.

It will also underwrite the college’s finances, “giving a stronger balance sheet”.

George Holmes, the university’s vice-chancellor, described the arrangement as “the best of both worlds” for the college.

“This new model retains the integrity, identity and relative autonomy of the college while retaining the benefits of being part of a much larger organisation than the college was itself,” he said.

The Bolton merger was first proposed in the Greater Manchester area review, which ended in June 2016.

Bury College was planning to join in, but dropped out in April last year due to a change in plans from the original proposal.

It’s not the first FE and HE merger to go ahead; according to the AoC there have been 12 since 1993, most recently in 2012 involving Leek College and the University of Derby.

And a further two partnerships are in the offing, involving City College Southampton and Southampton Solent University, and Lambeth College and London South Bank University.

However the latter may be under threat as the college was forced by the FE commissioner to seek out other potential partners.