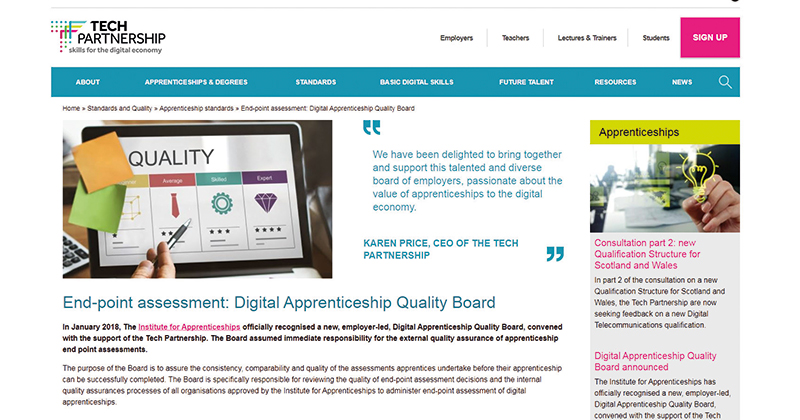 A company approved to provide external quality assurance for digital apprenticeships will fold in September, in a situation described as an “unworkable short-term solution”.

The Institute for Apprenticeships approved the Tech Partnership for the role in December, two months after it announced plans to shut up shop.

The IfA also confirmed that if no suitable replacement is approved by September, it may itself have to take on the quality-assurance role for the sector, “either on a permanent basis or for however long is necessary to cover any transition”.

Other parts of the sector are not best pleased with the situation: a source from an end-point assessment organisation for digital apprenticeships, who asked not to be identified, has hit out at the IfA.

“There are already far too many questions surrounding EQA and apprenticeships. For the IfA to grant the Tech Partnership a short-term contract is unthinkable,” they said.

“What we need now more than ever is continuity, comparability and fairness not more uncertainty.

There are already far too many questions surrounding EQA and apprenticeships

“More effort needs to be concentrated on a successor for the EQA and encourage more positive press for apprenticeships, as opposed to fuelling the fire with unworkable short-term solutions.”

The decision has split opinion across the tech industry. Some providers believe that the Tech Partnership is a “sensible” short-term appointment and that a replacement will be ready for September.

The EQA provider will be auditing end-point assessment procedures, and EPA providers will foot the bill.

It will be able to mandate changes to EPA organisations’ activities and can invoke sanctions if these are not met.

EQA firms are obliged to report back to the IfA on the quality and consistency of assessment, as well as the general operation of the standard and assessment plan.

The Tech Partnership announced on January 8 that the IfA had officially recognised its new employer-led Digital Apprenticeship Quality Board, and would assume “immediate responsibility” for EQA.

“Its primary responsibilities are to review the quality of end-point assessment decisions and the internal quality-assurance processes of all organisations approved by the IfA to administer EPA,” a spokesperson for the IfA said.

Responsibility for EQA “will be transferred to another organisation”, before Tech Partnership closes.

“This involves employers, through the Digital Apprenticeship Quality Board, deciding on the best approach, and overseeing an orderly handover,” he added.

“The most important point is that we now have over 5,500 digital trailblazer apprentices studying, and hundreds of apprentices now undertaking end-point assessment.

“It was therefore agreed that it was in the best interests of a rapidly growing body of learners and employers to establish an EQA panel as soon as possible to establish consistency, comparability and quality in the assessment process, and that the Tech Partnership was the best-placed organisation to arrange this on an interim basis.”

The Tech Partnership, which has not received a letter from the IfA confirming its EQA appointment, announced on October 4 that it would close the following September.

Its income in 2016 was £7.1 million, but its latest accounts show this had fallen to £2.45 million in 2017. The organisation retained just under £4 million in assets minus liabilities.

The IfA already plays a dominant role as EQA provider of choice for many trailblazer groups – even though it describes itself as the “option of last resort”. There are concerns across FE that its staff could struggle to cope if it also has to take on EQA for the digital sector.

NOCN boss Graham Hasting-Evans has previously described situations in which the government’s own EQA regulator, the IfA, will effectively have to regulate itself for a number of sectors, as “bizarre”.

An IfA spokesperson said the Tech Partnership had been “very open about its position” and had been “working closely with the Institute and the relevant trailblazer groups in order to assure the quality of specific apprenticeships and to support the transition to an alternative EQA provider from late 2018”.